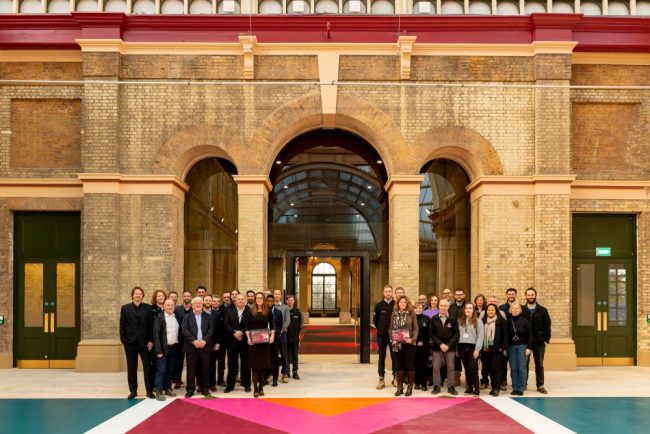 With less than two weeks to go until the reopening of Alexandra Palace Theatre and East Court, today we took an opportunity to celebrate and look back on this incredible project with our lead contractors, Willmott Dixon.

Enabling works on the East Wing Restoration Project began in 2016 and started from the ground up. With the Victorian floorboards carefully lifted and stored, the hard work could begin. Major interventions in the Theatre included removing the rake in the stalls, strengthening the balcony and extensive work on the ceiling and roof.

In addition to the extensive work in the Theatre, the project is also transforming the East Court.  Watch the video below to find out more about the work that has gone into this once in a lifetime project.

A testament to the ambition and scale of this project, the East Wing Restoration Project has received several awards before we have even opened the doors!  In 2015, the project was named the winner in the “unbuilt” category at the esteemed New London Awards – which celebrate the best designs and construction in the capital.

In October 2018, Alexandra Palace Theatre was the big winner at the Haringey Design Awards, taking both the ‘Best Restoration’ crown as well as ‘Overall Winner’ award. The independent panel of judges commended the project, and our lead architects Feilden Clegg Bradley Studios for the “sensitive and intelligent restoration” and described the arrested decay look and feel of the Theatre as “architectural poetry”.

The Theatre and East Court will reopen on 1st December, and to celebrate we are throwing our first ever Christmas Carnival! It will run for three consecutive weekends from 1st until the 16th December and take place in the East Court, Ice Rink and London’s “oldest new theatre”.

Whether you are into winter skating, panto on Ice, Horrible Histories – Horrible Christmas or our Christmas Market and legendary StrEATlife food and craft beer festival, there is something for all ages. Father Christmas will also be swapping the North Pole for North London as he sets up camp in the East Court. Visit christmas.alexandrapalace.com to find out what is on.