The 14 Hour Technicolor Dream held at Alexandra Palace on 29 April, 1967 was one of the seminal events of the counterculture revolution in 1960s London.

The event was organised as a fundraiser for the paper the International Times. The multi-media, multi-arts event featured poets, artists and musicians, headlined by Pink Floyd. Yoko Ono performed, watched by John Lennon, while other acts included The Crazy World of Arthur Brown, Soft Machine, The Move, Tomorrow, The Pretty Things, Jimmy Powell & The Five Dimensions and Pete Townshend, among others.

Mike McInnerney, collaborator on the festival and the designer of its iconic poster, talks us through his amazing memories of the event…

I remember an anxious moment during Saturday afternoon preparations for the 14 Hour Technicolor Dream. Standing in the middle of the vast, empty Great Hall of Alexandra Palace, a cathedral like space almost as big as a football pitch. Ticket distribution had been haphazard so the number of sales was unclear, would our ‘happening’ fill the venue with people and experience of the developing counterculture?

The London counterculture scene had been growing since a core of activists created the seminal poetry event performed to an audience of 7,000 at the Royal Albert Hall in June 1965. From then, what was considered a nascent underground continued to expand into original forms of music, politics, art, design, performance, fashion and publishing projects. A counterculture confronting an increasingly nervous establishment.

I was art editor of the alternative newspaper International Times based at Indica Gallery/bookshop in Holborn. The office was raided by the Obscene Publication Squad and local CID on April 9 1967. This attempt by the establishment to close down the paper led to the re-purposing of the 14 Hour Technicolor Dream, initially organised by John Hoppy Hopkins and Dave Howson as an IT fundraising event, to a Free Speech Benefit. Hoppy asked me to design the poster which listed an ever-expanding line-up of musicians and performers keen to lend support to the newspaper and the cause. 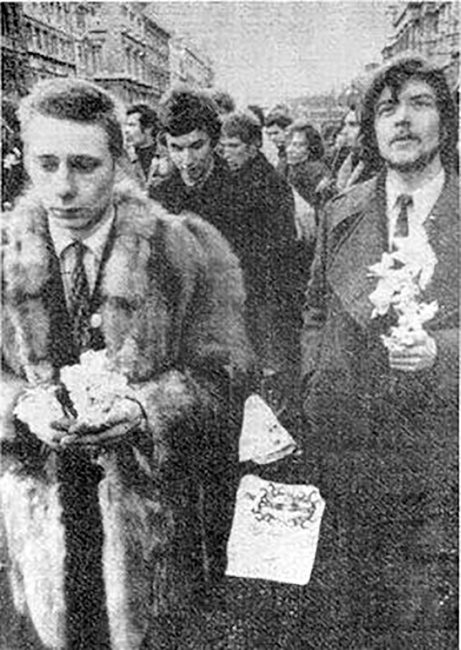 An occasion I remember like a dream during early preparations for the event concerns a drive I took with Dave Howson on a perfect sunny day through pretty Surrey villages, in what must have appeared an alien vision at the time – a rainbow group of long haired hippies in a beautiful psychedelic hand-painted Buick Electra convertible. The top was down as we headed towards the winter quarters of a travelling fairground in order to negotiate the hire of a Helter-Skelter.

There was little to worry about on the day of ‘The Dream’. At 8pm fireworks heralded the start and 10,000 people heeded the call. It was a multi-arts event featuring live music, poetry, dance, performance art and large inflatables among many more attractions. Two stages were placed at either end of the hall for music, one of the stages set against a huge structure of scaffolding covering the giant Ally Pally concert organ. A small stage in the centre of the hall was set up for poetry reading and performance. A gigantic light tower in the centre of the hall provided projections for light shows, strobe effects and films including Flaming Creatures as well as film arc lights turning night into day.

There were stalls and people in harlequin costumes, acrobats and jugglers. I spent some time selling posters and newspapers on the IT stall alongside Jack Henry Moore and played bongos for the David Medalla performance of ‘Fuzzdeath’ with the exploding Galaxy Dance Troupe.

The Helter-Skelter provided thrills and spills for people high on acid. Simon & Marijke read Tarot cards and told fortunes in a booth. Denny Lane sat on the floor strumming his acoustic guitar with no one paying much attention. Suzy Creamcheese was rolling and distributing banana skin joints, supposedly hallucinogenic and completely legal. People were high on the night, grooving to the vibe, wandering aimlessly or just resting on the floor. Some wearing formal suits, most in hippie attire.

A group of young mods briefly caused aggravation at the ticket entrance but I remember a wonderful relaxed and comfortable atmosphere amongst friends and family. More a sense of being with a congregation than an audience. Those seen strolling included John Lennon while Yoko Ono’s ‘Cut Piece’ was being performed to a captivated group of young men.

The French actor Jean-Louis Trintignant was using the Technicolor Dream as a backdrop to the filming of ‘Col Cuore in Gola’ directed by Tinto Brass. Pink Floyd returned straight from a gig in Holland and played in the early hours of the morning in what appeared to be a perfect setting anticipating their debut album ‘The Piper at the Gates of Dawn’ released four months later.

As dawn broke, people sat on the grassy bank outside the palace welcoming the sun. An open backed truck drove up the hill to the entrance and despatched loaves of bread and bananas to all present.

We were there and it felt like something had shifted and had been confirmed. A glimpse of truth which had a future.

The event raised enough cash to clear some of IT’s debts and start a free speech fund, though organisers Hoppy and Dave Howson would find themselves having to pursue ticket sellers, missing tickets and ticket sales, proof that not everyone was tuned-in to the spirit of the occasion. 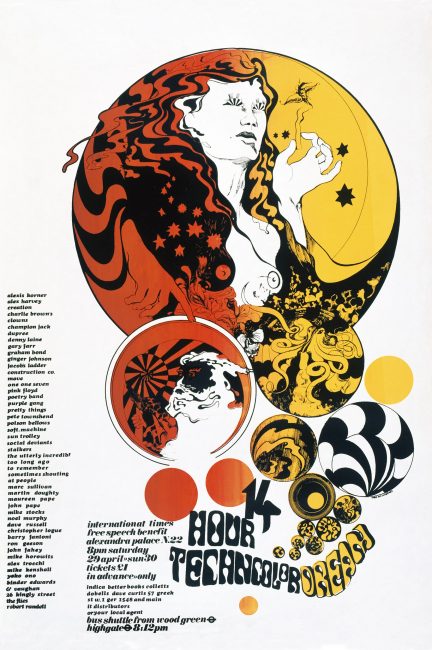