On the first anniversary of the reopening of the Theatre, Lou Glover, Alexandra Palace Theatre Manager, talks us through her last 12 months

I started three months before we reopened and it was still very much a building site, with hard hats and hi vis everywhere. To even see the transformation in those final weeks to a fully functioning – and amazing – theatre was pretty spectacular. And a bit nerve-wracking too.

The opening weekend was something anyone involved with the Theatre will never forget. Seeing such a mix of people using and enjoying the space was fantastic. Events were then booked pretty much every day that December. 40,000 people toured the theatre in the first month alone. It’s barely slowed down since.

We had to learn how the building operated alongside running those shows. We’re still exploring different formats and ways of presenting shows in the space, which is pretty exciting. We’re operating a modern theatre with Victorian infrastructure. If you look at the stage, you wouldn’t think that below it is two stories deep. The stage traps there are the originals from when the theatre was last used over 80 years, as just one example. Other venues rip out these layers of history but as we were closed for 80 years ours remain and we find creative solutions to working with this history. 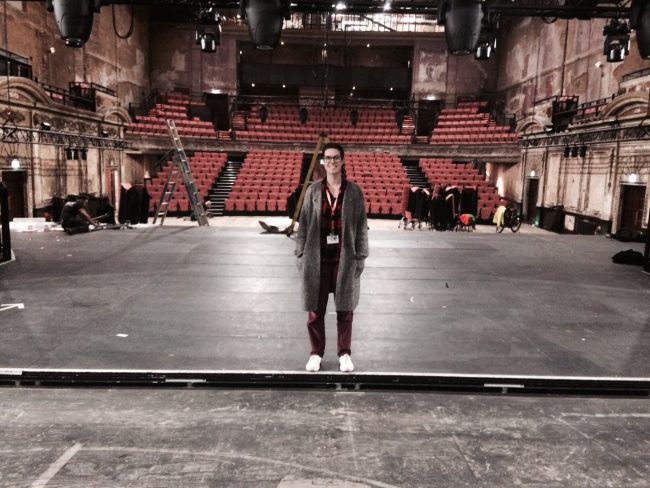 We love the challenge of working with such a variety of performers and programmes. We’ve covered everything from theatre to fashion, from jazz to opera, and from stand-up comedy to cinema. It’s been great to integrate the Theatre into our large scale public events too, like our Fireworks Festival and the Great Fete. The Theatre has added an extra dimension to what people know and love about Ally Pally.

There’s been so many highlights. Earlier in the year we had FKA Twigs, our first standing concert, immediately followed by the Liam Gallagher film premiere and performance, immediately followed by Graham Norton interviewing Madonna. We balance these high profile events alongside our Creative Learning programme, which gives local people the chance to contribute to and experience this amazing space. It’s this variety that gives the Theatre such a great identity.

We think we’ve got a ghost. There’s a light on the stage that swings on its own. And our radios will go off and on without us touching them when we’re in the Theatre. Definitely a ghost.

It takes a little longer to get people seated for a performance as so many of them, when they first walk in, spend a minute or two taking in the spectacular look and feel of the venue.

Our volunteers are simply amazing. They do so much to bring the venue and all its history and stories to life. The Theatre is here for everyone to enjoy culture in all its forms, so it’s great that we can open it up to so many people, and our volunteers are fundamental to this.

We couldn’t have achieved what we have done so far without so much support. Our theatre team, from all departments, really pull together every night to make the theatre work like a dream and we are really well supported by the rest of the organisation. We owe a big thanks to our volunteers, the Friends of the Theatre, the local community and our funders, to name just a few. There was such a will and passion to get the Theatre open. This feeling of such widespread support has only gathered pace over the last year.

I’d recommend Peter Pan Goes Wrong for a Christmas theatre experience, it’s such a great production. We’ve got some surprises coming up in the next 12 months too, but my lips are sealed at the moment. But there’ll definitely be something for everyone to enjoy.