2022 is the centenary year of the BBC, giving us an opportunity to delve further into the Palace’s unique role in the history of television. Taking the BBC’s mission to ‘inform, educate and entertain’ as inspiration Professor Kurt Barling from Middlesex University, explores the birth of television news at Ally Pally:

For many people over the age of 60 the mast at Alexandra Palace was a signal at the beginning of a broadcast that the News of what was happening in the world was about to happen. On screen the top of the mast would pulse with a rather old fashion graphic representation of information being disseminated to the world.

Now TV or visual News media are everywhere. On phones, tablets, computer screens, even watches so it’s hard to imagine that Television News only began happening after World War II and that Ally Pally, as it’s known to all those who can see it from their homes, was the actual birthplace of BBC Television News.

It didn’t begin at Ally Pally by accident. For a start the original television mast was built on a hill so the signal could travel further. Secondly and equally importantly the chosen spot for the BBC News Studios was very close to what at the turn of the twentieth century was perhaps equivalent in its day to what we now think of as the tech centre of the modern world, Silicon Valley in California. The electronics industry situated along the Lea Valley in Enfield developed all the technology needed for broadcasting including transmitting and receiving devices, otherwise known as Televisions sets.

In the 1960s I had a bedroom in North London that could see the mast at Ally Pally.  It was a place for picnics, ice skating and some of the best views over North London.  Little did I know as a boy that that was where the News was transmitted from. Even less that one day I would be a BBC journalist broadcasting day in day out across the country. 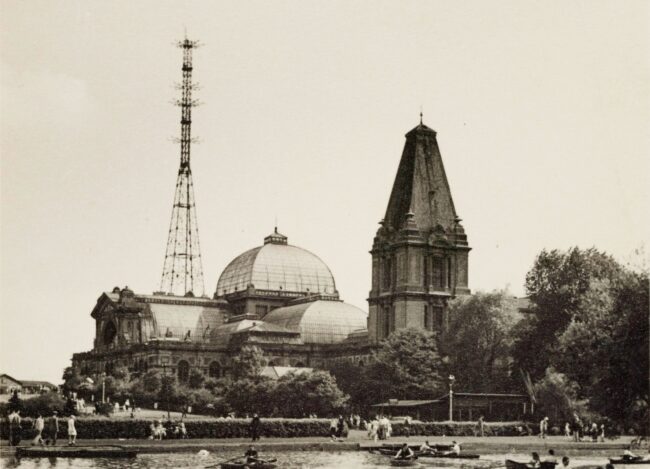 Of course, back then it was still only the BBC and ITN who had the technology to do the job. Now there are huge numbers of broadcasters and online news providers of video content.

In those days television news was gathered, compared to today. much more slowly. But of course, in the context of Newsmaking, it was revolutionary. It could deliver News on the day, unlike newspapers where you would have to wait until tomorrow for today’s news.

When I became a BBC journalist in the 1980s, broadcasters were still making the transition from film, which needed a laborious process to develop, to videotape which sped up how quickly News could be shared with audiences. Now of course images and sound are all captured digitally on ever smaller devices. And with live transmission capabilities even from a smartphone, News can be with you within seconds of it happening nearly anywhere on the planet.

What hasn’t changed so much are the fundamental news principles that shape how we find news, how we assess the information about an event and what we should be responsible for sharing with the viewing and listening public. The technology may have changed the speed of delivery, but not so much the reasons for delivering the news. To educate, entertain and inform the public.

Newsgathering is all about finding out the who, what, why, where, when of an event and then why that event might have happened. In other words, a mixture of description of the event and an analysis of what it means. In the broadcast environment it is a matter of law that what Newsmakers show or share on the airwaves is the result of information that can be verified so we know it is reliable.

These rules are laid down by the regulator, the Office of Communications (OFCOM), which spells out a duty to broadcasters to be impartial in their reporting of events. Increasing numbers of online providers of news information are not governed by such rules and there is a big debate now about extending the OFCOM net and rules and how that can be policed.

I covered some pretty serious stories, from war zones to terrorist attacks, from deaths in police custody to fatal fires like Grenfell and it was always important for me to remember that what I did as a reporter was governed by editorial values. It was my guide to the way I behaved. 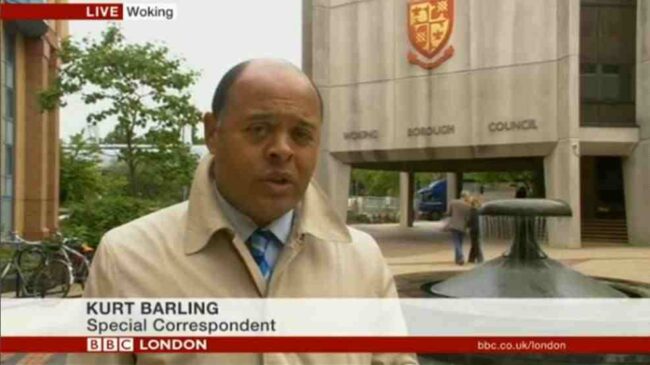 At the same time production principles have not changed either, despite the news makers ability to broadcast from the scene of a major news event as live broadcasting has been transformed. Just a few years ago you needed complicated satellite equipment to send the signal and equally sophisticated hardware to receive it at the transmission point.

News culture has evolved to try and impart some simple rules to those responsible for ensuring the news on our screens is accurate, impartial as well as informative. Some of the key words that guide the BBC and other broadcasters are fairness, decency, dignity, impartiality, accuracy, honesty and a respect for privacy. It is important to remember that the rules for broadcasters are still much tougher than for newspapers. A current exhibition at the British Library in Kings Cross called Breaking the News looks at the 500-year story of News Making across Britain.

So, transmission is not just about having the material and preparing it. As we speed up the way in which stories can be transmitted, the greater the need for journalists who are trained how to think in terms of verification and accuracy very quickly. We should ask ourselves, are social media channels a reliable source of accurate information if they do not have an editorial process which is guided by published values?

After a 25-year career in Public Interest journalism on the BBC one thing remained as a constant, if you have the power to send a signal with your voice and face into millions of front rooms, phones or even watches you must accept the responsibility to do it in a way that meets the standards for accuracy, honesty and integrity that were set out all those years ago at Ally Pally.

Breaking the News at the British Library runs until 22 August, 2022 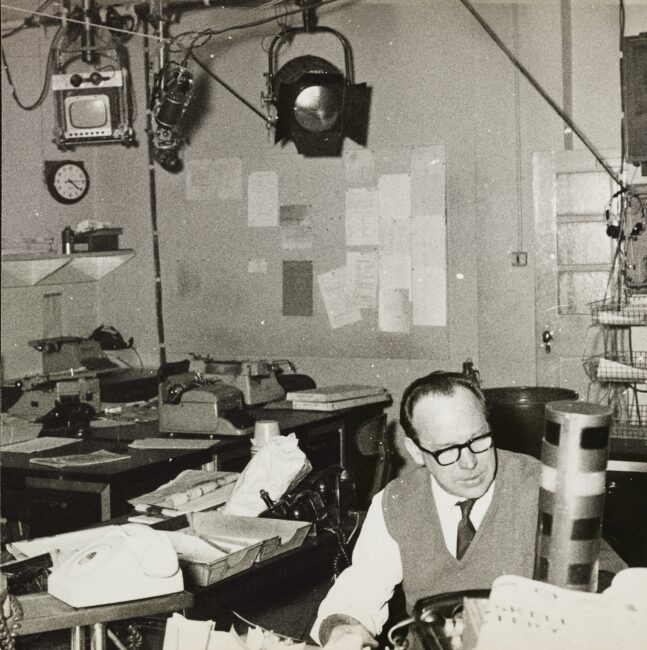 Newsroom 1 showing the microphone and, just below it, the camera used for headline bulletins and news flares 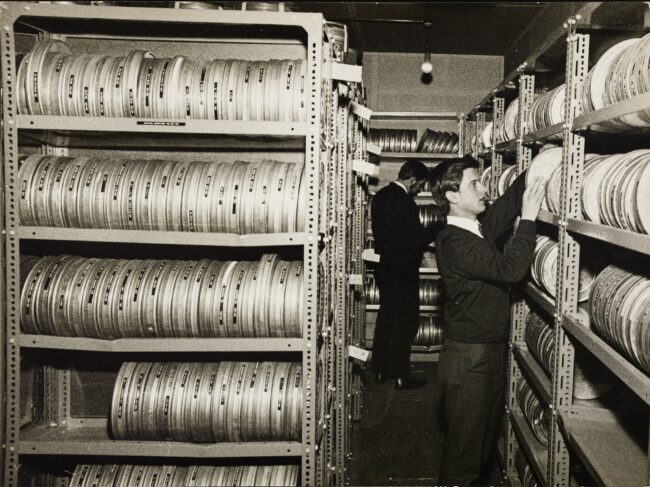 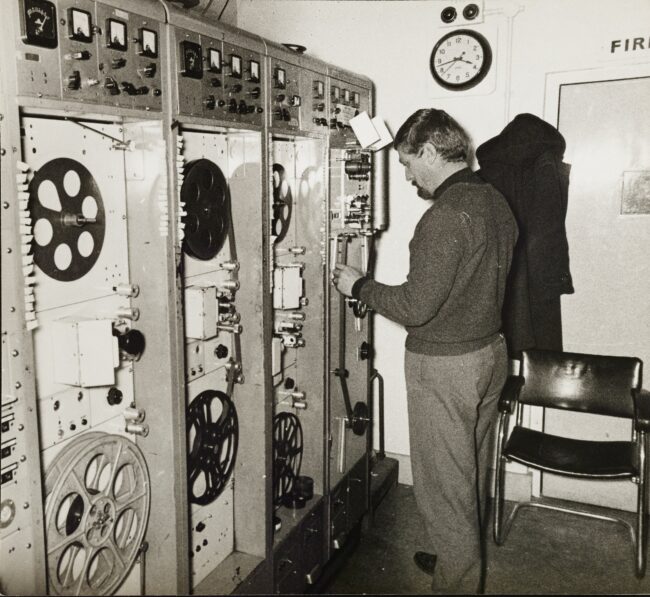