Acclaimed street artist Carleen De Sozer is currently working in the park to create new signage to help people with social distancing (she needs your help, see Make Your Mark).

Carleen is one of a host of artists we work with each year as part of our Creative Learning programme which aims to inspire and educate people through art and culture.

To celebrate this we’ve taken a quick glance at the array of art across the site and throughout the history of Alexandra Palace. Some you might know, but others you might not! 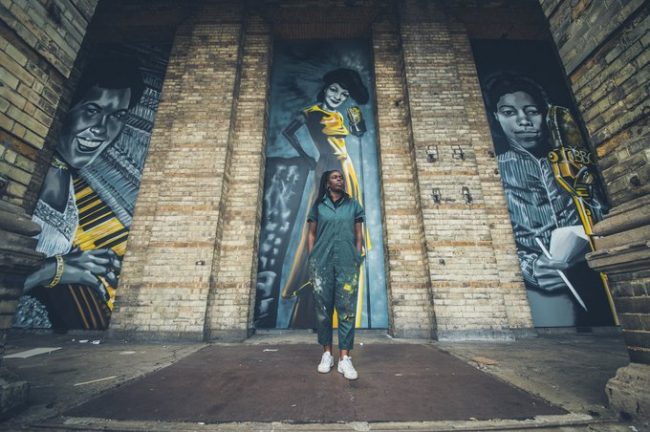 West Hall: As part of the restoration of the Palace following the devastating fire in 1980, a series of 10 murals covering 1,000 square feet were created in the West Hall corridor. Unveiled in 1988, they were painted by the ‘Haringey Mural Workshop’ led by Gary Drostle. They depict the history of the People’s Palace including the 1873 fire, the race course, aeronauts and the BBC studios, among other stories. You can read more here

Pete Fowler: Welsh artist Pete Fowler, who is perhaps best known for his artwork for the Super Furry Animals and his Monsterism toys and goods, created the below work as a performance piece during our celebrations of the 50th anniversary of the 1967 Summer of Love. People who attended the event were able to watch Pete in between talks and film screenings. It took 10 hours in total to complete and is now part of our collections.

Hornsey College of Art: The main art school campus was at Crouch End and the Fine Arts dept took up residence in the south west wing of the Palace back in 1964. HCA was “an iconic British art institution, renowned for its experimental and progressive approach to art and design education”. Alumni of the college include Anish Kapour, Viv Albertine and Ray Davies among a host of other renowned names in the world of arts, culture and entertainment.

Londesborough Room: On the north west corner of the building, the Londesborough Room was totally refurbished for the 1988 reopening of the Palace. Artist Ricardo Cinalli, a graduate of Hornsey School of Art who lost work in the fire of 1980, created a series of neo-classical paintings for the room. Sitting alongside a restored Victorian relief depicting the Judgement of Solomon, the gigantic figures reference the story of David and Goliath. Find out more from this Channel 4 news report as the work was getting underway. 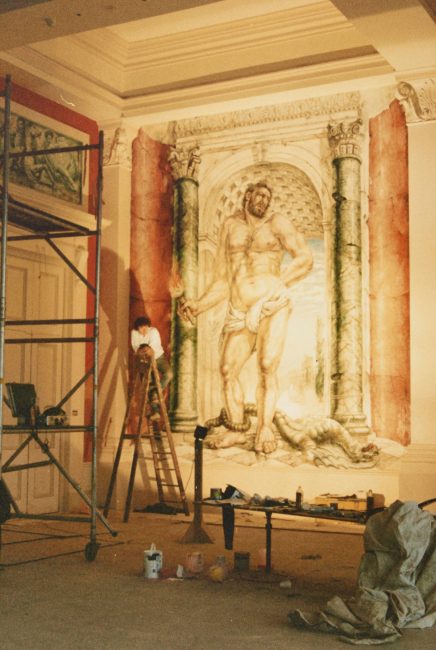 Alexandra Palace collections: Our archive contains thousands of documents and photographs relating to the history of Alexandra Park and Palace, covering minute and revealing details of our past. This includes a series of drawings for the Palm Court and Great Hall rebuild dating back to the 1980s.

And it might not be art per se… but traces of historical ‘graffiti’ are dotted around the venue. Our basements preserve some written declarations of love from the 1980s, while behind our theatre stage calculations are scribbled on the walls, which we think date back to its time as the BBC prop store. In Studio B of the original BBC television station, fitted out from the former Victorian dining rooms in 1935, an 85 year old chippy joke still holds its own. Pencilled behind soundproofing walls it reads: The wages of sin is death, the wages of the Carpenter is worse.