The BBC Concert Orchestra are continuing to rehearse in the Alexandra Palace Theatre. In this blog, Alex Walden, Orchestra Manager, talks us through the last few months in the life of the Orchestra:

How long have you been rehearsing back at Ally Pally?

We finally returned to Alexandra Palace to spend three days rehearsing in the Theatre ready for our BBC Proms concert at the Royal Albert Hall – our first live performance since lockdown. We were really pleased to be back! Our last proper time together as a full orchestra was also at Alexandra Palace for a recording in mid-March. The following week we were in lockdown and all our planned performances were cancelled.

Tell us about the BBC Concert Orchestra?

The BBC Concert Orchestra is incredibly versatile and performs a huge variety of musical styles. We could be playing the hits of the West End one day, movie themes or jazz the next and symphonies or opera another day. The list is really infinite! We’re a broadcast orchestra, so as well as live performances, you can hear us on BBC Radio 2 and BBC Radio 3 and we also pop up on television too. 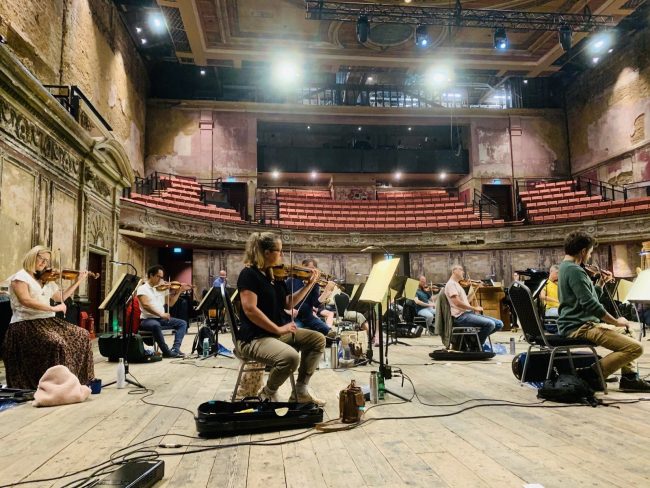 What’s an orchestral rehearsal like?
For any concert we perform we would normally spend a couple of days rehearsing. Often the musicians won’t have seen the music beforehand so we spend time on each piece, familiarising ourselves with the music. Even the very first play through is amazingly accurate and the orchestra is very fast to perform what’s asked of them. The conductor will work with the orchestra, determining how fast or slow the music is required to be, how loud or soft, how it sits together and how to make the music shine. Even though some orchestras have more members, the BBC Concert Orchestra have a big sound!

How did life change for the orchestra in lockdown?

Once the Covid-19 lockdown was put in place, we were unable to come together. The versatility of the musicians still allowed us to contribute and perform. Each of our members rose to the challenge! They became accustomed to recording themselves at home and digital performances became the ‘new normal’! It’s been different but it’s led to some fun projects that has meant we could connect with our audiences in a new way online. Some of the social media content has included joining Hugh Bonneville in a special ‘W1A’ TV Theme tune moment and Matt Lucas in a special version of his ‘Baked Potato’ song for BBC One’s ‘Big Night In’ show.

Another highlight has been our collaborations with pop artists for BBC Radio 2’s House Music Sessions. We’ve been recording orchestral arrangements with singers including Mel C, Ronan Keating, Jason Mraz, Jack Savoretti and Nell Bryden, which you can still catch on BBC Sounds and BBC Music Youtube. Plus, we made it into the studio to perform the new soundtrack by Hans Zimmer for BBC’s Planet Earth: A Celebration with David Attenborough. We have also been continuing our learning work online by connecting our musicians with schools via Zoom workshops.

How have you approached coming back to performing together?

The orchestra management team spent weeks of lockdown figuring out how we can find a safe way to return to performing live. This has been an incredible challenge but we found a way to bring our musicians together, whilst maintaining social distance and observing all of the government guidance.

When we would normally be an ensemble of up to 60 musicians rehearsing at Ally Pally, we worked with 36 players for our first live performance post lockdown. This is mainly because of the amount of musicians we can fit safely onto the extended Royal Albert Hall stage for the BBC Proms. For an ensemble of musicians to function as one, they like to sit closely together so they can hear and  watch each other closely – this ensures that the musicians can play together musically. Under social distancing rules of maintaining at least a 2-metre gap between each player, we had to spread the orchestra out quite widely. So there was a lot of get used to in these first rehearsals back after lockdown. 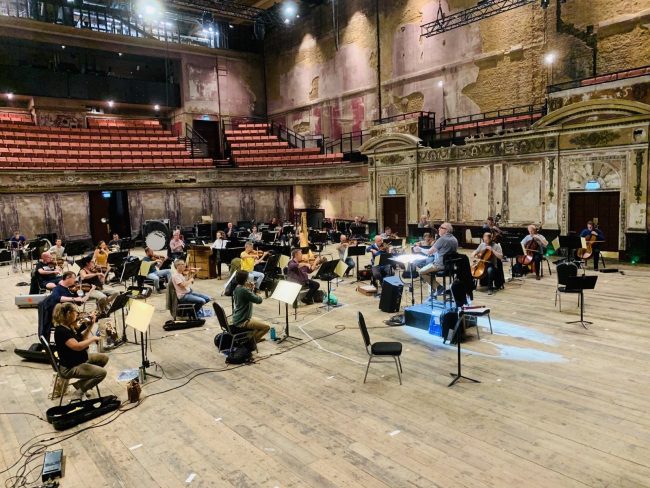 What do the orchestra like about playing at Alexandra Palace?

We love playing in the Theatre at Alexandra Palace – the sound is clear and resonates well. Some halls can be a bit ‘washy’ – just like when you sing in the bathroom, the sound becomes difficult to distinguish (when it comes to my singing this helps!). However, when there are a significant number of musicians, this makes it difficult for them to play together. So we like the Theatre at Ally Pally because the sound is warm and clearly defined. I think this especially helps us now we’re so spread out.

Our priority is to protect everyone and be safe but we don’t underestimate how important it is to bring live music back to our audiences. Hearing the orchestra play together for the first time in six months at our rehearsals in Ally Pally was really emotional and a soul lifting moment. Live music just reaches a place not many things do and I underestimated how much I had missed it.

Our BBC Prom celebrated the music of Viennese operetta featuring music by Strauss and Lehar. The melodies are really well known even if you’re unfamiliar with Operetta – it’s uplifting and works brilliantly for a smaller orchestra. You can watch and listen to our live performance from the Royal Albert Hall on BBC iPlayer and BBC Sounds. It is a privilege to know we’re bringing this wonderful music to people at home all over the country and beyond.

An Extraordinary Year at Ally Pally