I think you’ll agree that there’s something incredibly magical about Fireworks night. It’s something all of us have experienced. Getting wrapped up warm, putting on our boots, meeting up with friends and family and gazing up at the stars in woolly hats and soft gloves. Fireworks night (as we say at Ally Pally) is more than just a display – And Alexandra Palace is no stranger to hosting them.

Believe it or not, the first ever Firework display at Alexandra Palace was held way back in 1875 by a fine gentleman by the name of Mr James Pain. By all accounts, Pain was a true showman, staging elaborate acts and in his programmes, meticulously describing every firework contained within his shows in detail. One thing is clear, his events were all about pushing boundaries.

He famously re-enacted the destruction of the Spanish Armada and reconstructed Mt Vesuvias along with the Last Days of Pompeii on the boating lake here in the heart of the Palace grounds. You can read more here.

Needless to say, Pains legacy (albeit with the advantage of minimal health and safety regulations!) has left a huge precedence for future generations at the Palace to live up to.

So in the spirit of pushing boundaries, this year we wanted to introduce yet another first. We wanted to place the audience as close to the action as possible. We wanted to try something new and to give those who weren’t able to be there a front row seat, right in the very heart of our display.

For the first time in the Palace’s illustrious 156 year history, we set ourselves the challenge of filming the display in 360 VR. Stick with me, because I’m going to show you how. (Spoiler alert… The end result looks cool)

So how does VR work?

VR, for those of you who aren’t technically minded, stands for Virtual Reality. Unlike a normal video camera that films from just one viewable angle, a VR camera creates a 360 degree recording from every angle around it.

Allow me to explain.

When you watch a normal video on your device, you have only one angle to choose from. VR on the other hand, lets you interact. The cool thing is you become the director, choosing whether to look left, right, up or down as if you were there in person.

Well filming fireworks is challenging – And filming London’s largest firework display, is quite possibly the biggest challenge of its kind. Each year it gets bigger and bigger… and bigger. Indeed when it comes to filming our annual display, our crew often battles the elements to capture the perfect shot.

It takes a crew of 6 talented videographers to capture every snap, crackle and pop, as hundreds of dazzling fireworks light up the London skyline across our 196 acres of parkland. And that’s not all. Drones capture the uncatchable from the air, whilst our ground crews immerse themselves amongst the excited crowds below. It’s hard work, but great fun. With the decision taken to film in VR, it meant that our crew would have to boldly go where no member of the public has gone before… Into the firing zone – That’s the stretch of grass in front of the viewing area where rockets get lit and barrages are fired.

We placed our 360 VR filming rig at the very front of the viewing area – So that to the south you’d see the London skyline and to the north you’d see the Palace at the top of the hill in all it’s glory. By now you’ll have realised, filming fireworks takes a a fair amount of effort. So to achieve maximum resolution, we film in 4k (that’s 4 times the size of High Definition you see on your TV). All that means is that it gives us the very best chance of capturing everything as it happens, at the highest quality possible. As audiences oohed and ahhed throughout the staggering 22 minute performance, we waited patiently as our VR rig took in everything that happened around it.

Don’t forget: If you’re recording VR, make sure you hide once you hit record!

As the last firework exploded in the sky, it was time to back up the footage and head back to the studio to see how it turned out.

The editing process begins by stitching the footage together to create a full 360 “world”. Sometimes all you need to do is make some basic tweaks. Colours get boosted and contrasts are adjusted to make the image as clear as possible given the night time setting. Most importantly it’s a fun process – And it’s mesmerising to see it all come together. Incredibly, you often unlock some unexpected gems along the way. 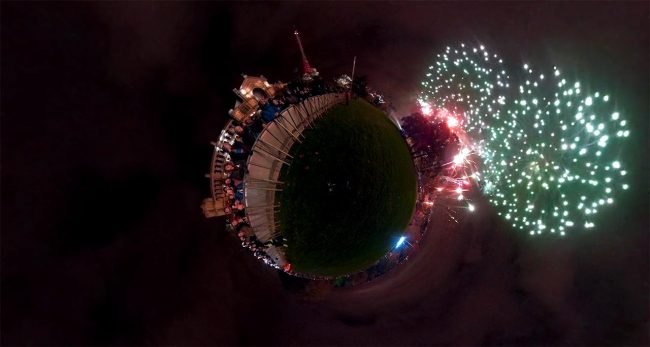 In fact John, our editor, discovered some mind-blowing otherworldly effects, which had us all transfixed at what looked like Alexandra Palace’s very own outer-space planet. The good news is Vimeo and YouTube both now offer extremely clever support for 360 – Both platforms immediately identify that it’s a VR clip and process the file accordingly. So it meant that once we’d uploaded it to our YouTube channel, and their servers had worked their technical wizardry, it was ready for all to see.

With all firsts however, it simply represents another beginning – And sets a new standard for the next big thing. With that in mind we’re now looking at even more jaw-dropping ways we can use video to move audiences even closer to the action. Perhaps next year, we’ll attempt to record from the eye of the storm and place cameras right next to the fireworks themselves. Watch this space.

And you know what?

Had Mr James Pain lived to see the technology, we’re certain that he would have outsmarted us with extraordinary uses for it, but we’d like to think he would have approved.

All in all we’re continually seeking out opportunities to try new things. To experiment. To be bold. And to keep an open mind. This is our small piece of history and we’re proud to have lead the development of a new spectacle that has never been seen before at Ally Pally.

You can watch the finished 360 VR video below

Let us know your comments below the video and if you have any suggestions for how we could use video. We’d love to know your thoughts.

Until then, we’ll see you next year.

Tom Bendix is the Director of Social Films, a Video Production Company who filmed the annual display and lead the development of 360 VR.