After 80 years the Alexandra Palace Theatre has finally reopened for live performances with the BBC Proms at… performance of Trial by Jury. Now we have celebrated this landmark moment we are knuckling down to complete the restoration and open officially on 1st December. Work will restart, installing seating and finishing front of house areas, but even at this late stage of the project we have made surprising discoveries.

The last few years have seen a huge amount of activity in the auditorium, most of which magically disappears into the arrested decay aesthetic, restoring the foyer and completely rebuilding the backstage areas that were lost to fire in 1980. The stage itself has stored carefully numbered floorboards, but has remained relatively quiet until preparations were made for the BBC Proms. 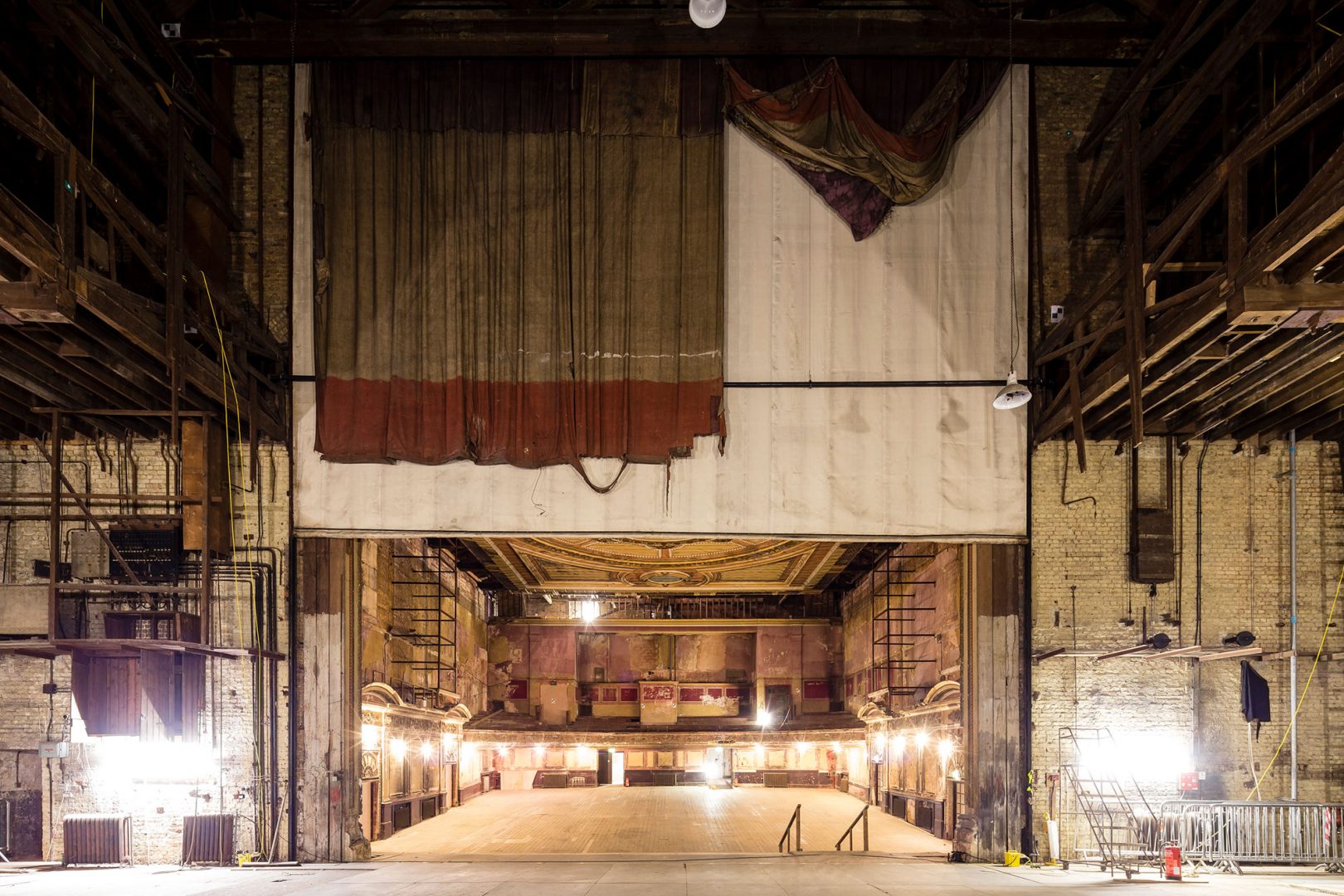 The redundant safety curtain needed replacing and when it was brought down we removed the old curtain that was out of reach and not seen in living memory. The stage is the most historically significant part of the Theatre and is why little reconstruction work was done here. The complex sub-stage machinery has been scanned in minute detail by Lincoln Conservation, and the matching roof machinery and innovative brine dimmer lighting controls onstage have remained in situ. These incredibly rare survivors were all known and part of our commitment to retain what makes Alexandra Palace unique.

There was no record of the Theatre curtain and the only historic image we have with the curtains drawn is from the restoration by W. J. MacQueen-Pope in 1922, showing a standard set of coloured drapes.

We were blown away that they turned out to be beautiful and intricately painted ‘House Tabs’ and in remarkable condition. Despite expected wear from use, creasing and dirt, the colours are still vibrant and the designs and AP logo still visible. Once they were brought down and laid out we were able to see the full design more closely. 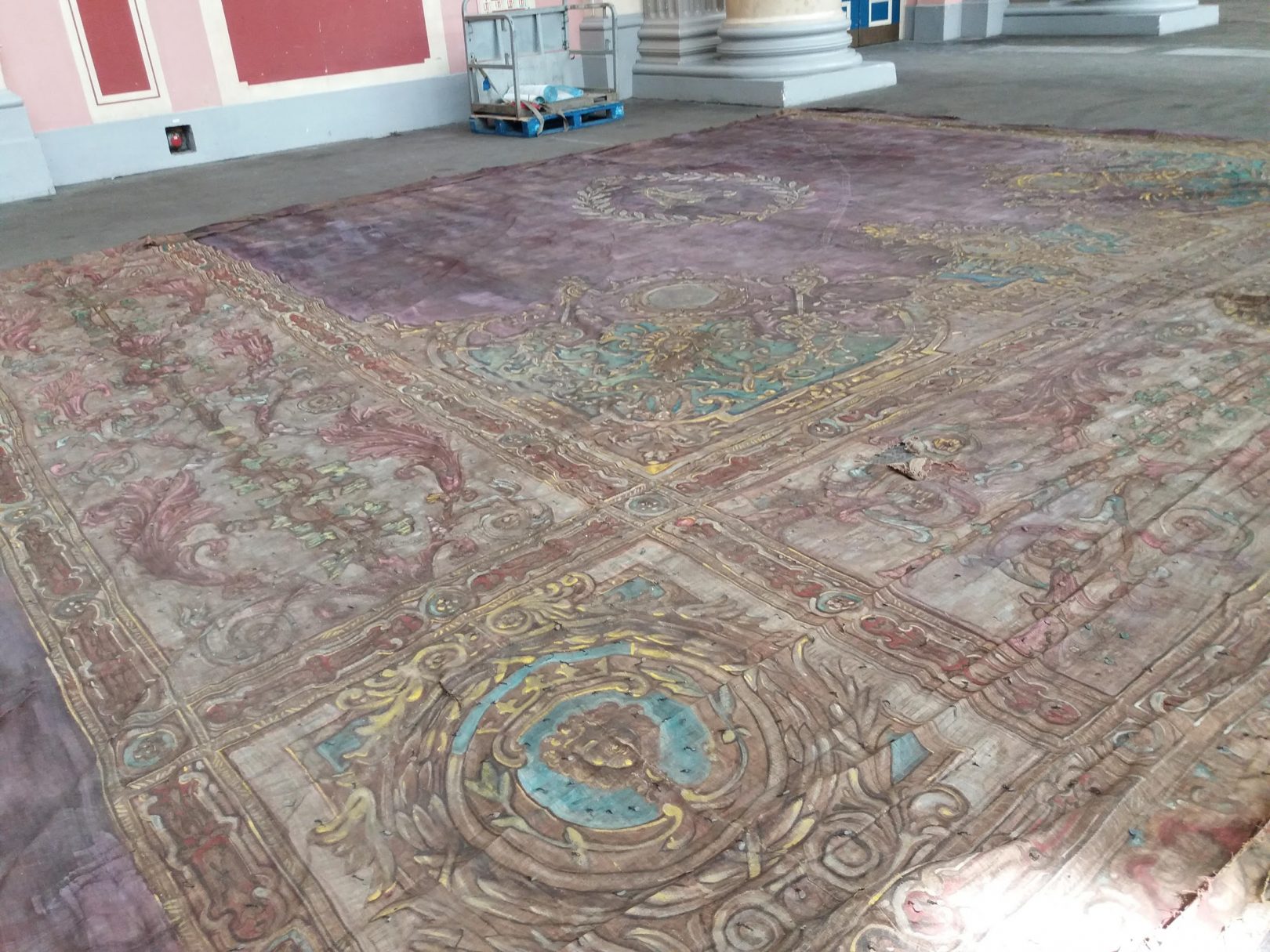 They have been a completely mystery to us but by consulting experts and referring to our extensive archive, we’re beginning to put the pieces together. The colours and designs on the curtain appear to match those of the 1922 restoration, when similar wreath patterns were added to the ceiling and side wings. We are reliably informed that the colours are likely more muted than Victorian so probably early 20th century.

For these to have survived is incredibly rare, owing their survival, as with the stage machinery, to the many years of disuse for live performance. There are few remaining curtains in UK theatres, with most such as those at Normansfield being ‘Act Drops’, or backdrops used during the shows themselves. To have front house tabs, and for them to match the carefully maintained auditorium decoration is very special. 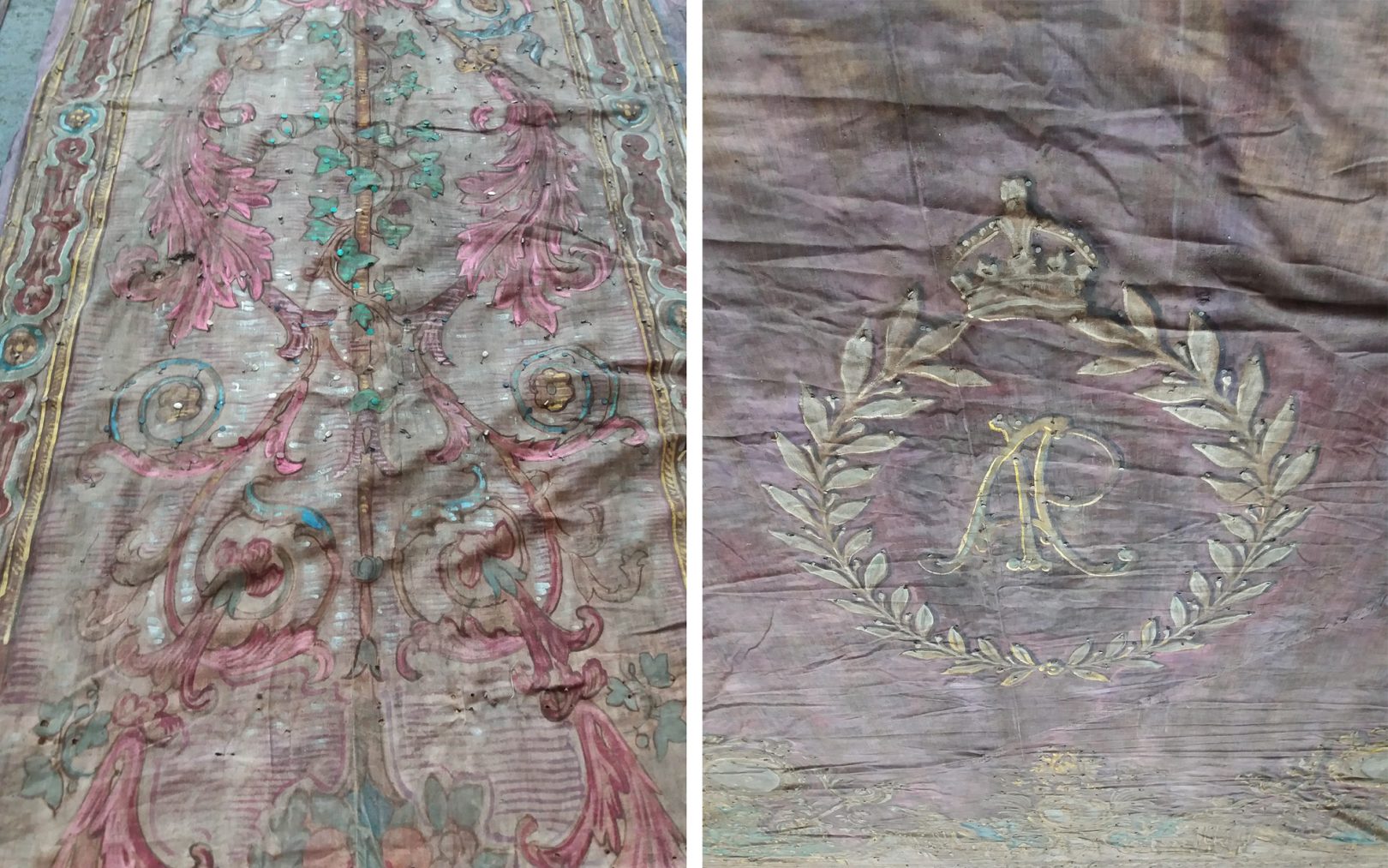 We have recovered many historic objects throughout the restoration process but these curtains are by far the largest and now offer us an exciting but difficult problem of how best to save them and make them accessible. For now they are in storage but this is a short term solution. We employed a professional conservator to prepare a report. To conserve the curtains themselves will cost at least £40,000, plus more for mounting and display. We also saved the ladder beam and rigging, such important elements of a technology driven stage like the Alexandra Palace Theatre, so that they can all be publicly displayed, whilst protected from further wear on the once again active stage! 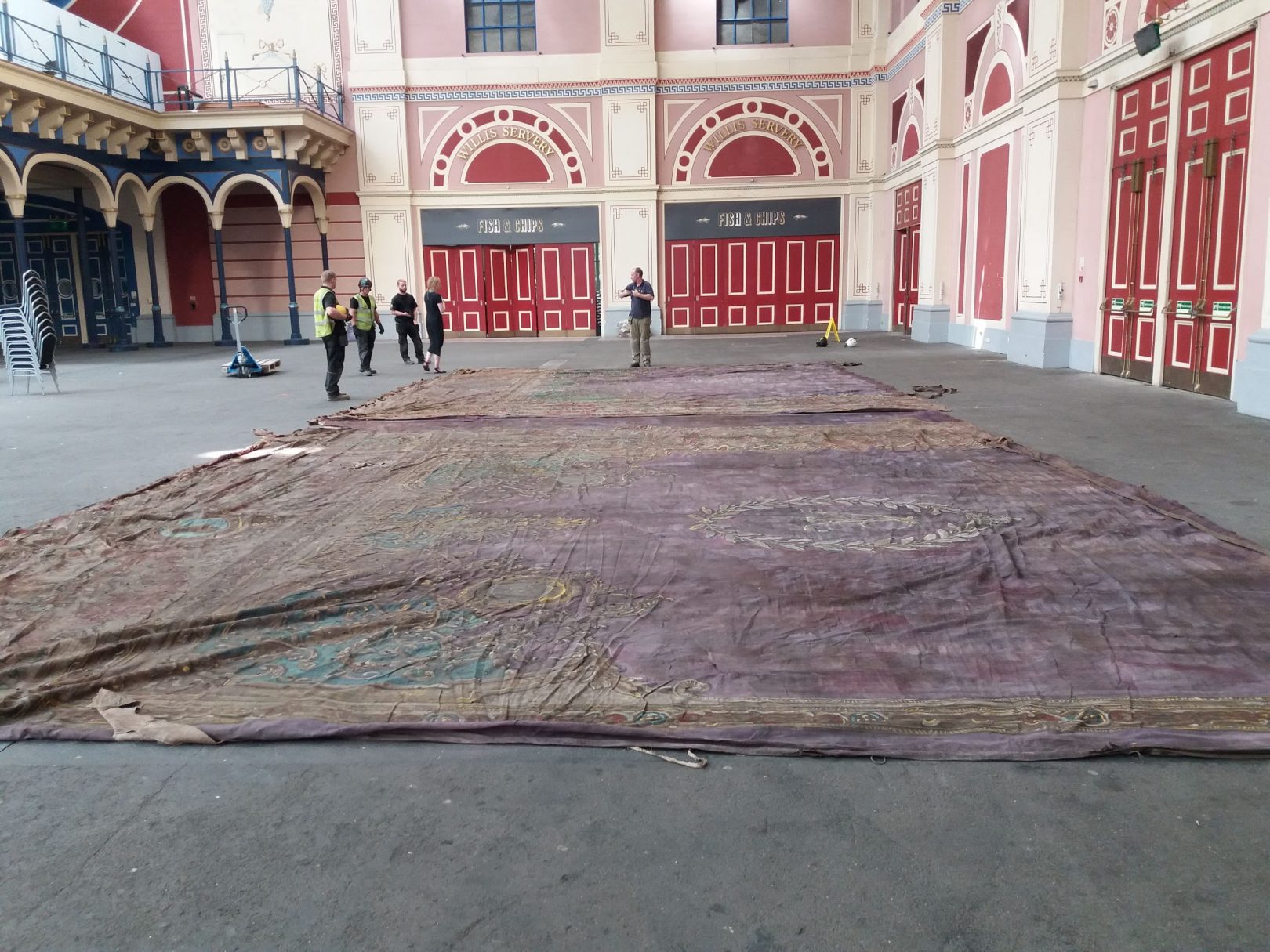 We will be displaying some of our fantastic collection of stage machinery from other Theatres in our newly restored East Court but we would love to bring these beautiful curtains back to life just as the Theatre itself is reawakening. If anyone has information that would shed light on their history or our understanding of them please do get in touch! Most importantly we are now looking for any support in raising the money needed to rescue these important treasures.