The last 160 years of the Park and Palace have provided us with so many amazing memories, experiences and important moments in history. As a result our archive is chock full of plans, photographs, ephemera and records of all that activity dating back to the first public use of the park in 1860.

Over the past five years we have digitised more than 8,000 items, researching and documenting, to chart the successes and failures of this eclectic venue. Recently, the archive has been made more accessible through Google Arts and Culture and our CollectionsIndex+ online management system.

There are still many years of work ahead to fully catalogue, identify and date all of the items, but we are lucky to have an enthusiastic core of archive volunteers and supporters in the heritage world who donate their time, expertise and advice to the Trust unstintingly.

In this blog we take a closer look at just one of the items from the Alexandra Palace collection, to give a little insight into the important work of conservation in helping us to care for and preserve the evidence of the past for the future. Knowing more about the history inspires us, and we hope demonstrates the value of Alexandra Park and Palace to generations of visitors.

The photo below is the oldest plan of the Park we have in the Archive. It is dated 1875 – the year that the second Palace was opened after rebuilding. It shows the earliest layout of leisure facilities in the Victorian entertainment complex. The northern portion was sold in the late-nineteenth century, though the shape of the pathways can be traced in the modern day road layouts. Other long vanished places appear; the circus, racecourse and the railway; the Victorian invention that made the Palace viable and was responsible for creating the suburbs of London.

The plan measures approximately 1210 x 910mm. It is printed with black ink onto draughtman’s cloth and features hand coloured orange, red and blue ink as well as iron gall ink manuscript on both recto and verso. It has the usual conditional issues found with working documents, namely surface dirt, creases, tears acquired throughout use and subsequent tape used for repairs.

Although miraculously surviving the 1980 Palace fire, unfortunately the plan at some time since then had been folded to A4 size rather than rolled, and kept in a cardboard folder – not the most ideal conditions for a 145-year-old map. But we are grateful that it had been preserved by the current Park Manager throughout his 10 years at Alexandra Palace as a treasured part of the Palace’s heritage. 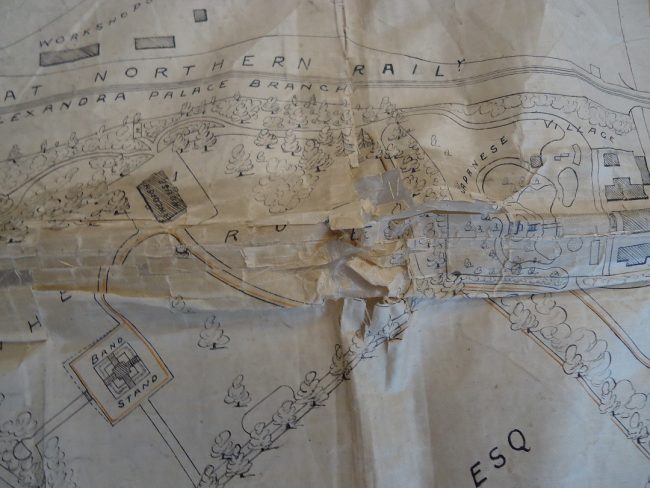 Because of the plan’s importance to our history, and because we want to keep it safe for future generations, the decision to ask the National Conservation Service to recommend treatment was easy.

Specialist paper conservator Marie Chappell takes up the story here: “At the end of 2019, we received the plan at our studio in Hackney, London. Legibility and handling of this oversized object was difficult because of its poor condition and impeded its use and digitisation. Discrete spots tests were carried out on the pressure sensitive tapes to determine the viability of any conservation treatment and a treatment plan of surface cleaning, relaxing creases, tape removal, and repair with Japanese tissue was proposed.

“Alexandra Palace were happy to proceed with the recommendations and work began immediately. Due to the size of the plan and the wish for it to be digitised it was transferred to our Upper Heyford studio. There the plan was surface cleaned front and back using a soft goat hair bush to remove loose surface dirt and smoke sponge to remove ingrained surface dirt. The tape removal rather threw us. Despite our initial testing, the many different kinds of pressure sensitive tape present meant many different methods had to be used. This was painstaking work, lasting eleven hours in total. 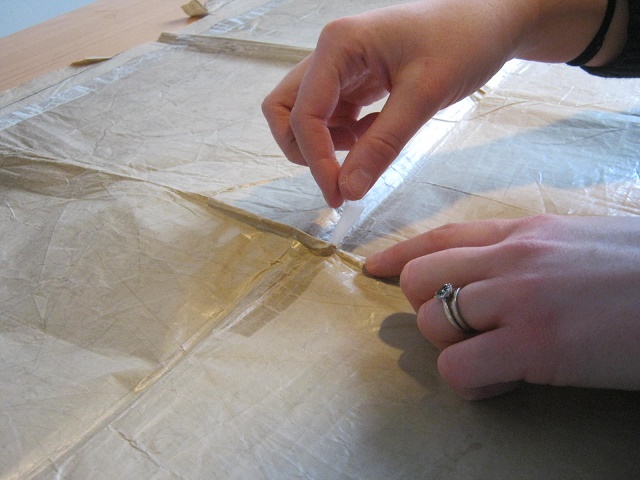 “Due to the number of different kinds of tape present we had to retest removal methods as we went. Once this step was completed the plan was humidified to relax the creases and ensure well matched repairs. This was done using a controlled method of a humidification chamber consisting of a bottom layer of damp capillary matting covered with SympaTex fabric which the plan rested on with the entire construction covered by polythene. This method of humidification very gently introduces water vapour to an object and relaxes it while reducing any risk of moisture damage to the media and support.

“The plan was pressed between non-wove polyester and acid free blotters, all of which was under boards and weights. This stage lasted several days to ensure a good end result. The next step was the repairs, which were challenging in a different way. Not only were there a large number of repairs, the tears were often quite long. In addition to this there were a considerable number of loose pieces which had to be reunited with the plan. Although laborious, this was also quite fun and all of the staff at Upper Heyford got involved piecing the plan back together. The end result of this was an intact, complete plan which could be properly seen and used, a very satisfying result.

“Following conservation treatment, the plan was digitised and rehoused. To take up less space in the Alexandra Palace Archive, the plan was rolled in an archival polyester fold and placed within an acid free cube tube. Although this differed from the original proposal it still met the aims of inert housing which would protect the plan but still enable handling and viewing.” 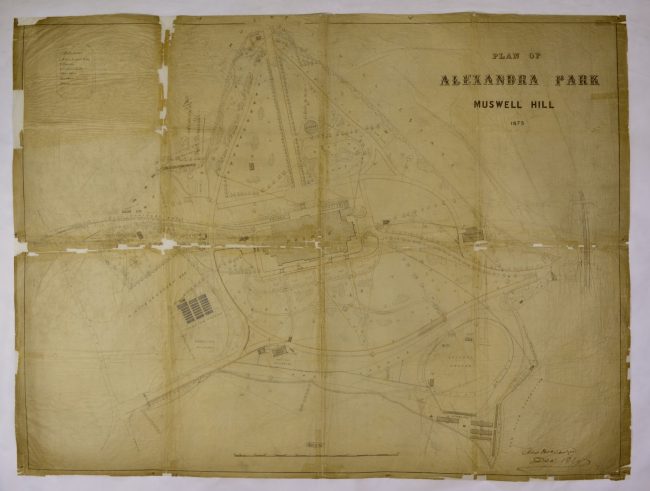