2022 is the centenary year of the BBC, giving us an opportunity to delve further into the Palace’s role in the history of television. Taking the BBC’s mission to ‘inform, educate and entertain’ as inspiration, Professor Jamie Medhurst explores ‘Entertainment’ on pre-war television:

The founding principles of public service broadcasting in Britain for 100 years have been information, education, and entertainment. When television joined radio as an infant communication medium in the early 1930s and was finding its feet, it was to entertainment that the early pioneers turned for many of the experimental broadcasts – singers, dancers, acrobats … even performing seals appeared on television in those early years.

Prior to the world’s first regular high-definition television service being launched from Alexandra Palace in November 1936, the BBC had to create an interest in television amongst a public who were more familiar with radio and the cinema. They had to persuade potential viewers that this new medium – aimed at the domestic setting – would be a worthwhile investment. To this end, during the 1936 Radio Exhibition at Olympia in late August and early September (Radiolympia) broadcast programmes from Ally Pally to Olympia to give a flavour of what the new service would offer.

(📷 Helen McKay performs ‘Here’s Looking at You’ to Radiolympia)

Cecil Madden, the service’s programme organiser and lead producer produced a 30-minute Variety show – the world’s first such television show – with The Three Admirals singing Ronald Hill’s specially-composed song for television, Here’s Looking at You, the television orchestra performing under the baton of Hyam Greenbaum, Helen McKay, Miss Lutie and her performing horse, Pogo, and a dancing act from Chilton and Thomas. The show closed with the whole cast singing Here’s Looking at You.

On 8 October, some four weeks before the official launch of the television service, the first edition of the magazine programme, Picture Page was broadcast for test purposes and for the trade. Edited by Cecil Madden, produced by George More O’Ferrall, and hosted by Canadian actress Joan Miller, the programme became one of the most popular and enduring of the BBC pre-war television output, and continued when the service resumed after the war. Miller would sit at a switchboard and put viewers through to various celebrity acts and artistes who would do a ‘turn’. The first programme included 16-year-old actress Dinah Sheridan, Flora Drummond the suffragette, and a busker, John Snuggs. All were interviewed by Leslie Mitchell, who became one of three pre-war television announcers, the others being Jasmine Bligh and Elizabeth Cowell. 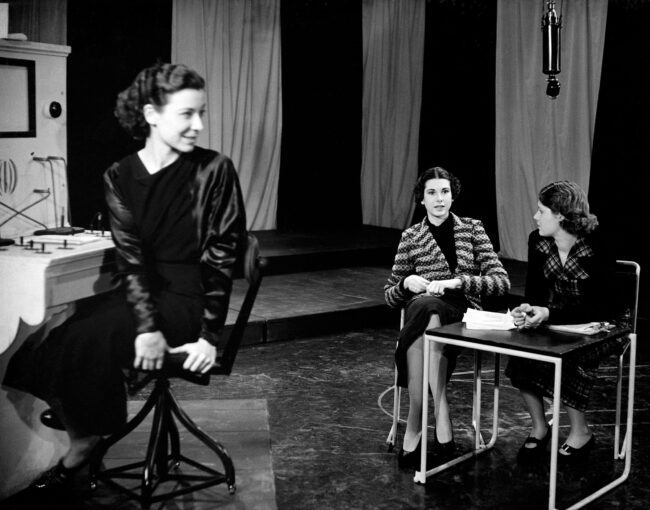 In June 1937, the broadcasting critic of The Listener, Grace Wyndham Goldie, welcomed television not only as a medium for ‘day-to-day entertainment’, but as a medium which provided a direct relationship with the person in front of the camera – an intimacy not felt in the cinema. By 1938, 30 per cent of studio time at Alexandra Palace was spent on cabaret, Variety, and light entertainment programmes. Picture Page hosted 1855 items during its three-year run prior to the Second World War and Grace Wyndham Goldie to write: ‘It is, in fact, a kind of high speed television circus. It exploits these things of which television is master’.

Cookery programmes also found their place in the schedule with cooks such as Moira Meighn and Marcel Boulestin becoming familiar faces to viewers. There was even an opportunity to watch a programme at 3pm on Christmas Day 1936 when B. J. Hulbert demonstrated how to carve the turkey.

There was also a unanimous opinion amongst the small but growing television audience that good Variety and cabaret were ‘eminently suitable’ for television, as a survey of television viewing in 1938 showed. There were less favourable comments on studio demonstrations and talks: ‘Disapproval concentrated largely upon demonstrations of cooking, washing, ironing, etc, which were condemned as of little interest to those who could afford television sets.’

The BBC’s Television Service between 1936 and 1939 was innovative, pioneering, and foundation-laying. The puppeteer Jan Bussell, who had performed on the BBC’s 30-line television service in the early 1930s, recalled that he had requested a transfer from radio, where he was based, to television – a more suitable medium for puppetry – on more than one occasion. His request having been turned down he resigned, only to find that a fortnight later he was dispatched to Alexandra Palace as a television producer in early 1939. It was, he said, ‘one of the happiest jobs of my life, swept away by the enthusiasm of the small band of pioneers’. Val Gielgud wrote in 1957: ‘Nothing short of blazing enthusiasm and a consistent refusal to admit that anything was impossible could have achieved the results which by the beginning of the War had given to Great Britain the acknowledged lead in the television field.’ 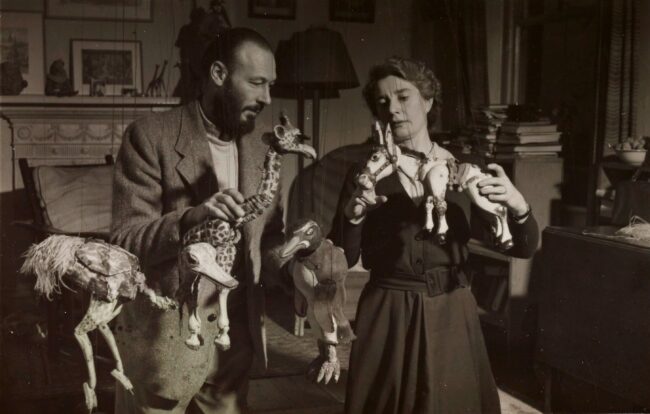 Much of this pioneering success was down to the hard work and enthusiasm of Cecil Madden. Michael Barry, who joined the BBC as a drama producer in 1938, described Madden as ‘bird-like and with an ingenious persistence, he possessed a flair for the world of entertainment that was able to bridge the gap between all that was functional in the BBC … and what came to be called “Show Business”’. In addition to having overall responsibility for the schedule, his background in the theatre and as a playwright meant that he was extremely well-connected with London’s theatres. He was successful in attracting a huge number of West End celebrities to Alexandra Palace during the first three years of the television service, many of whom were happy to perform for free and to be involved with the early days of what promised to be an exciting new medium.

So, let’s dispel the myth still held by some that those pre-war television days were full of dry, static, and somewhat overly-worthy programmes (there were some, but…) and let’s celebrate those light entertainment and Variety programmes that set the scene for what was to come in the post-war years when television really took off.

Jamie Medhurst is Professor of Media and Communication at Aberystwyth University. He is author of A History of Independent Television in Wales (2010), and The Early Years of Television and the BBC (2022), co-editor of Broadcasting in the UK and US in the 1950s: historical perspectives (2016) and editor of the journal Media History. He is currently writing a book on broadcasting and society in Wales in the 1970s and is involved with research projects on key documents in European media history, and on an entangled media history of post-war Britain.