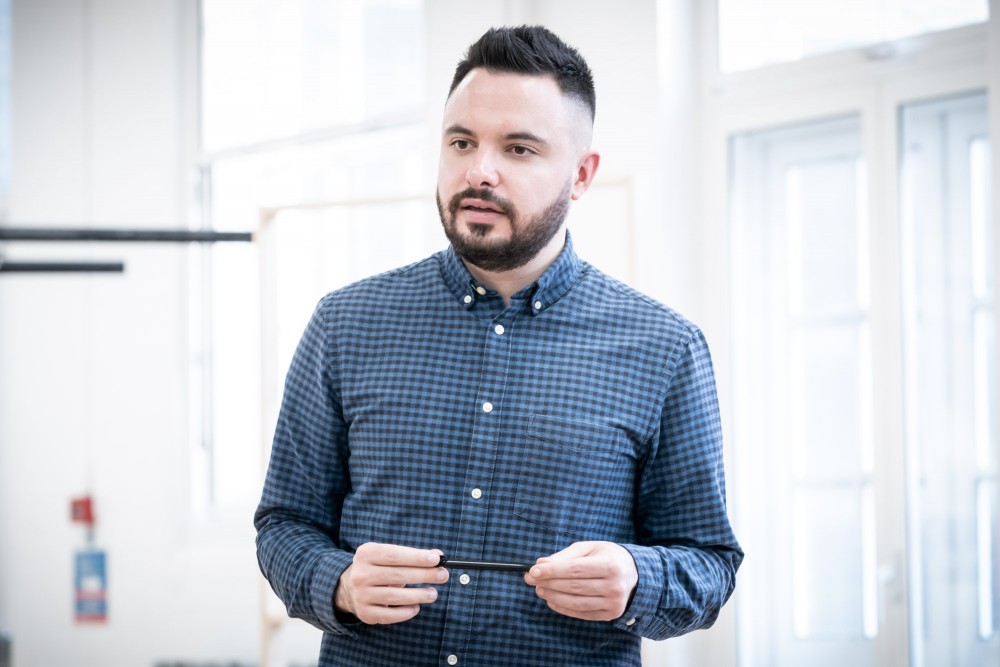 Why take on Richard III now?

‘Now’ is such an important word within the play, so that feels like a good place to start. It’s a piece that’s had an enduring relevance ever since it was written in the 1590s and I think that’s because it speaks to a cyclical pattern of history where, in times of national crisis, political extremists come to the fore. There have been countless instances in rehearsals where we’ve referred to the rise of right-­‐wing politics in the Middle East, Russia, the United States, or even closer to home, as we stand on the precipice of Brexit. As well as that relevance, I’d read an essay on Shakespeare’s fascination with mirrors, which eventually proved to be a catalyst for the visual landscape of the production, which Chiara Stephenson and I have been working on together since. In addition, conversations with Anne and John Barton – both of whom have now sadly passed away and are much missed – were instrumental in the development of this newly dramaturg-­‐ed version of the text. They explained that, between the three parts of Henry VI and Richard III there is a transition between an old and a new world order: we exit a medieval, devoutly Christian, universe and enter a Machiavellian world of mercantile power politics, where pragmatism and rationalism supercede conventional morality. It’s a world disturbed by seismic political change, a world not unlike our own. Collectively, those thematic, visual, textual and political inspirations made me want to direct the play. 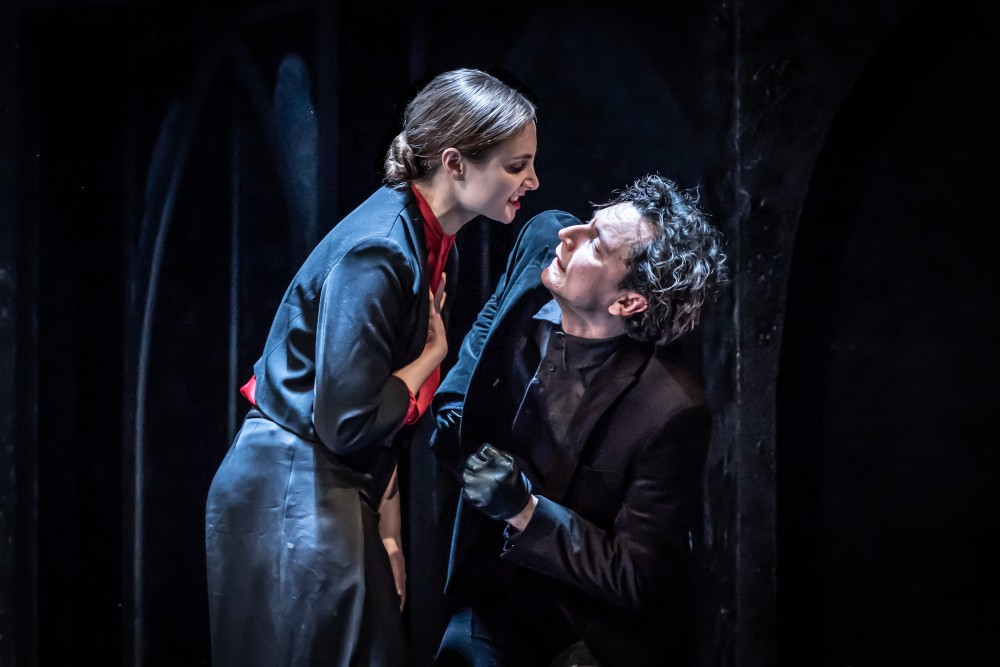 What’s influenced the development of this production?

There are a couple of things in particular. The first is this version of the script, which injects extracts from Shakespeare’s trilogy of Henry VI plays whilst, at the same time, streamlining the text of Richard III and focusing on the character of Richard as a product of his own (often traumatic) emotional and psychological context. On the first page of our script there are three quotes: neo is from Emily Dickinson, another is from Josephine Tey and the third is from The Smiths. The latter’s 1985 song,The Boy With The Thorn In His Side, contains the lyric: ‘Behind the hatred there lies / A murderous desire for love’. Richard is a serial killer, but we’ve tried to refrain from explaining his behaviour via an all-­‐purpose definition of psychopathy. He says he has no pity but, rather than this being inherent within him, what is he shutting out? What bit of his brain, which might be responsible for pity, love or fear, has been cauterised by trauma?

The women in the play hold such power for Shakespeare.It’s these women who step forward to be counted, to challenge the tyrant who will soon be elected to power when no-­‐one else will. One of the interventions I’ve made is to re-purpose lines usually attributed to Margaret within the character of the Duchess of York. I don’t think we earn Margaret as a character if we haven’t been on the journey with her through the Henry VI plays in their entirety, but I was determined to retain her voice in our version of the script. My hope is that this will offer a more forensic insight into the fractured relationship between Richard and his mother, which, having excavated their family history – and what they already say about each other within the piece itself – I felt compelled to explore. A high proportion of Shakespeare’s works focus on the dynamic between fathers and their children, so I think it’s significant that here, in this breakthrough hit of a play written early in his career, he focuses on a maternal relationship.

Tom Mothersdale was always at the top of my list to play this iconic role. I’d seen quite a lot of his stage work and always left the theatre moved by how detailed he was, how he was able to play these mercurial, shape-­‐shifting characters and remain completely, devastatingly truthful. So, to meet Tom and discover that we had this shared understanding of the chameleon-­‐like Richard III was the start of a special collaboration, one which I’m very grateful for. Tom is at the centre of a company of actors who I’m loving working with in rehearsals, who are constantly risk-­‐taking and surprising and invested in the old adage that we treat every new play like a classic and every classic like a new play. 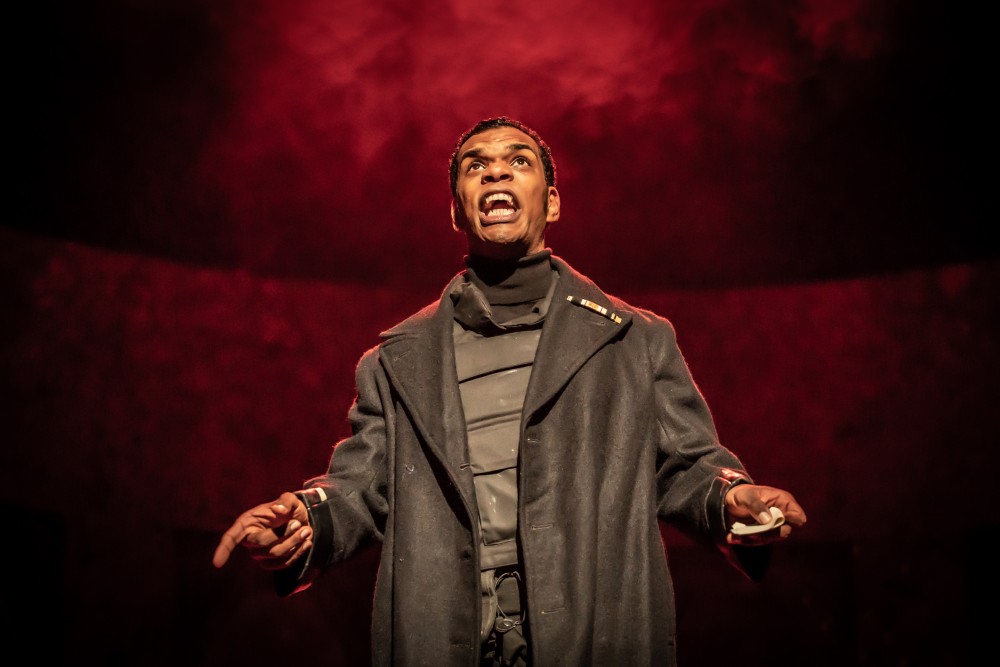 You’ve alluded to the dramaturgy of this version of the play. How do you decide what to cut?

For me, that process begins by writing out the play in its entirety by hand. I tend to work from several different versions, so that I can decide what the most useful punctuation might be, since it works a bit like stage directions in these plays. The process of transcribing the text allows you to feel like you’re in closer proximity to the writer, I think. It forces you to study the form of what they’ve written. After that, I try to interrogate what my major preoccupations with this particular story are. The practical considerations of what to edit are often about how best to tell that story via three key questions. Where is there exposition or repetition that feels unnecessary? Where is an idea introduced that detracts from what we want our version to say? Where is the story clear?

What do you want the audience to take away from this experience of seeing the play?

There’s a certain mythology surrounding Richard; he generates this polarity of opinion. There are still lots of people, some of whom I’ve met as part of my pre-­‐ production work, who believe Shakespeare was little more than a propagandist who destroyed his legacy. Most people think Richard is bombastic, chauvinistic, wildly funny and, of course, he is all of those things, but our focus has also been to reveal a deep well of longing in his character. Aside from that, Shakespeare’s play is so kaleidoscopic, taking in so much of what it was to be alive then as well as now, that I’m not sure it’s for me to impose a sense of what an audience should take away from it. I just hope it makes them feel and think and that it might stay with them after they’ve left the theatre.