In our previous blog we looked at the BBC’s history at Ally Pally. This time around, our archivist Melanie Bailey-Melouney explains the development of ballet here at the Palace…

The 1930s saw a period of radical change in entertainment in Britain. Experiments in TV were underway, leading to the first high-definition broadcast by the BBC from Alexandra Palace on 2nd November 1936. Another art form was developing alongside it, that of the British ballet company. The important integration of dance in early broadcasts helped the emerging dancers reach new audiences. It was a golden age of dance – the names of Margot Fonteyn, Alicia Markova, Frederick Ashton, and Ninette de Valois have survived the test of time and were all involved in ballets recorded for television here at Alexandra Palace.

D.H. Munro produced many such broadcasts, which were not without their challenges. It was considered that TV was not sufficiently advanced to warrant the creation of new pieces specifically for the medium and so choreography intended for the stage had to be adapted for the small screen. A number of dance critics found the result unsatisfying, claiming that a lot of the aesthetics were lost because the cameras were unable to capture the entire performance – close-ups just didn’t cut it for them. Writing in The Radio Times in 1937, Stephen Thomas rejected these views, claiming that complete faith should be held in the technicians who met every challenge they faced with great creativity and innovation.

Ballet continued to feature heavily in programming, appearing in the first broadcast after the reopening ceremony in 1946. With time, larger productions were filmed, ballets were created specifically for television, and, on 23rd May 1947, history was made with the first live telecast of a performance from a theatre, London’s Royal Opera House, produced by D.H. Munro. Although the cameras were tolerated, they were not catered to and the production team were forced to adapt to the theatre.

The history of the development of television and dance at Alexandra Palace highlights how involved the Palace has been with cultural and technological advances. The symbiotic relationship between the two encouraged innovation from both sides and helped in establishing some of the greats from the period.

The Alexandra Palace Television Society archive contains production files from early broadcasts, detailing running orders, camera routines, and show how short rehearsal times were, giving an insight into the practical considerations of putting together programmes. The scrapbooks of Cecil Madden contain photographs of various performances in the BBC studios. To explore the collection further, visit the history pages of our website. 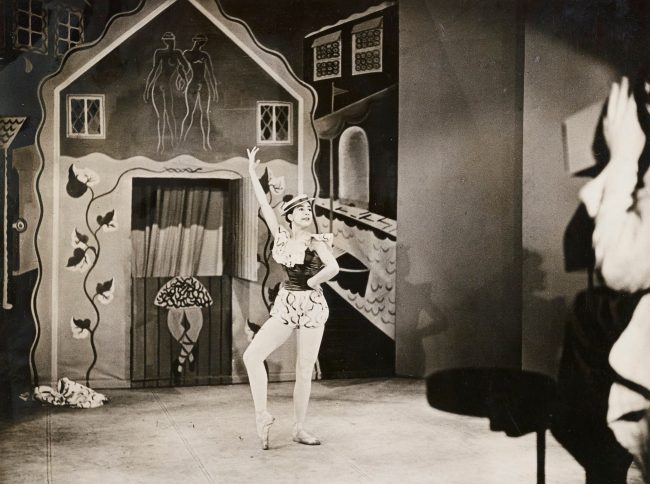