This month Le Patin Libre return to Alexandra Palace Ice Rink to present their new show Threshold. The Montreal-based company last wowed London audiences at Dance Umbrella 2014 with their award-winning Vertical Influences. We spoke with Alexandre Hamel, founder of Le Patin Libre, about the work of the company and their upcoming performance.

Le Patin Libre has been performing since 2005, how did the company come together?

After my competitive career as a figure skater, and a short pro career in Disney On Ice and other traditional ice shows, I felt like I still wanted to skate. However, I wanted to do it my way, away from the strict demands of competitions and commercial show-business. So, I started a little skating band, with a few friends I was training with in elite figure skating schools in Canada. We were all on the “alternative” side. We were very inspired by the freedom and creativity of urban dances and contemporary dance. We wanted to show that figure skaters could also do clever, cool and innovative stuff. Our first shows were done outdoors, on frozen ponds. We literally did the equivalent of street performances, during the winter carnivals organized in small cities of Quebec.

How did you first get in ice-skating?

Everybody skates in Canada! We just get thrown on skates the first winter after we learn to walk. Skating is part of our culture. It’s something all families do.

What would your advice be for those looking to get into ice-skating?

I’ve lived in ice rinks for more than 30 years and the people who learn skating the fastest are the kids playing and skating freely during public skating sessions. They learn very quickly how to go fast, go backward, stop, turn because they have fun and their mind is completely busy with the skating games they invent, instead of being focused on all kinds of useless worries.

So, be a kid! You don’t have to be young to be a kid… you just have to have fun, to be open to the trial and error process, to be playful and to not be scared of looking silly. Looking silly at work or at school might be a nightmare. But I always felt that looking a bit silly at the rink, when you’re obviously trying something new, is something liberating and fun.

And, by the way, falling on the ice doesn’t hurt much. It glides! You don’t scratch yourself. So go for it, fall. It’s part of the fun.

An important part of your work is creating inclusive events like skate parties, why is this so important to you?

We love doing this because public skating sessions were key to the development of our liberated style.

A few years ago, we did something that is very unusual for figure skaters: going to skate in public skating sessions. We wanted to dance and skate in a festive, social context with all kinds of people, not only figure skaters. There, we were pushed into a new creativity very much in touch with general audiences. We felt it immediately when we did boring stuff: people just moved on or ignored us. We also felt incredible energy when people stopped around us, cheered, laughed. It shaped a lot of our style. This is how urban dances developed in discos and block parties, by the way…

Then, some people started to dance with us! Although they were total beginners, their freedom and their openness to novelty inspired us.

Still, each time we animate a public skating session or a party on ice, we have new choreographic ideas and we meet skaters of all levels who impress us with their cool moves and good attitudes.

Just to share good memories: this is a short clip filmed at Ally Pally, during a public skating session, way before our big serious shows were presented there! Dubstep was still big in 2012! Our skating was not what it was now, but you can see how these moments inspired us…

The response to the first show you performed at Alexandra Palace was incredible, what have you been up to since your first visit?

We worked 4 to 6 hours a day on the ice to improve! We toured, too. We went in a dozen countries. -more than 150 performance per year. But, touring and repeating a show is also a way to improve.

We worked extremely hard to keep innovating, deepening our understanding of glide and defining our style.

After 4 years of work, I feel we now master glide like never before. We also use new choreographic ideas that we’re not present in our first show, like contact between skaters, sometimes brutal, sometimes very soft.

What drew you back to Alexandra Palace Ice Rink?

It’s the most beautiful ice rink in the world. We love the Victorian architecture and the fact that the style of the building is different from usual ice rinks. It is clean, classy, uncluttered. It’s a Palace, but for everybody and with an ice rink. What more can we ask for?

Dance Umbrella is a dance festival presenting the very best of world contemporary dance, it’s really an honor to be invited by them and included in their program. And, we’re happy they chose Alexandra Palace as a venue for our show. We kind of told them we wanted that…

According to my experience, Ally Pally also seems quite opened to new ideas and arts. Traditional ice rinks sometimes only let the local sport clubs organize events. I am happy that Alexandra Palace understood that our different contribution could bring a diversity that is beneficial for everybody. We might convince the dance fans that attend Dance Umbrella’s shows that ice skating is an awesome medium and that it can be really interesting. We might even convince them to try ice skating themselves!

Such special events are also important for ice rinks. They bring in new audiences, they promote the rink and they prove that, sometimes, the rink can be flexible in order to facilitate special activities welcoming big audiences and serving different patrons from those who usually use the rink. 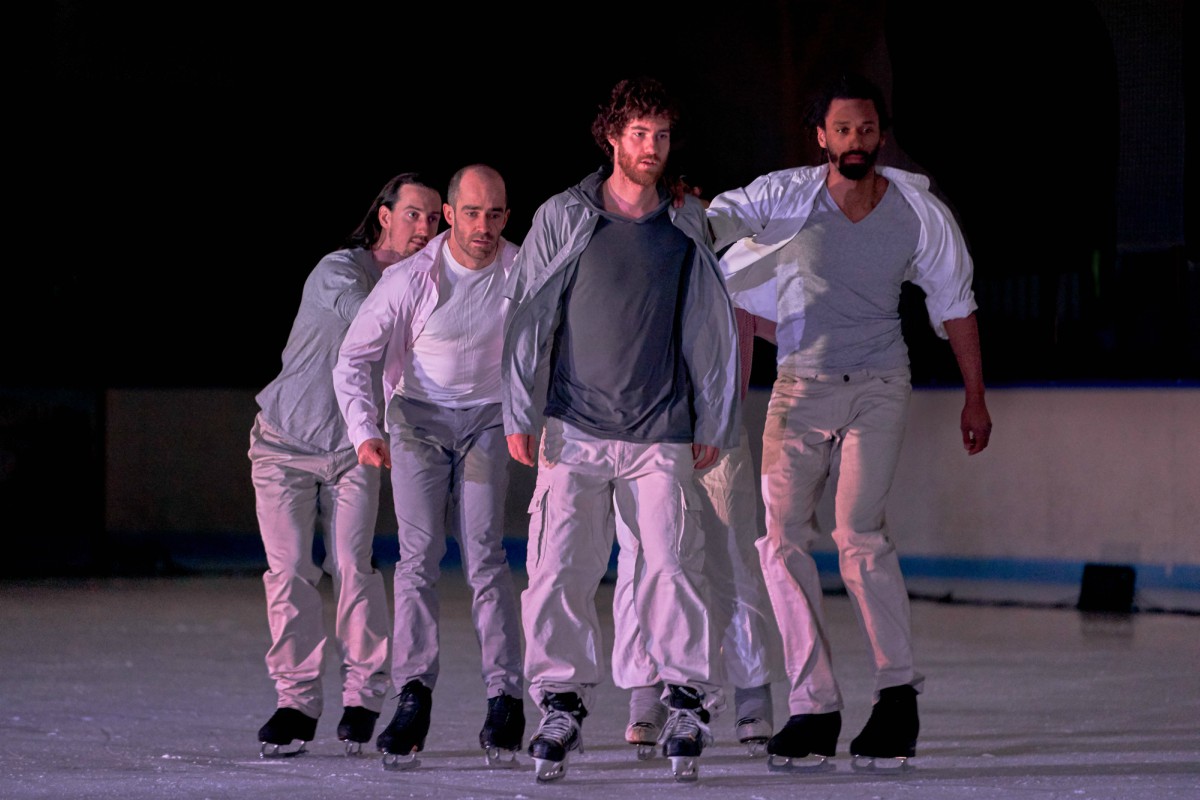 How did you go about creating the new show?

First, we did lots of research during about 2 years. This produced many short choreographic attempts.

We showed those to our dramaturg, Ruth Little. She works with important choreographers like Akram Khan and she was a resident dramaturg for very prestigious theatres.

In collaboration with her, we defined the ideas that kept coming back in all our choreographic attempts. They were all about change, about switching drastically from one state to the other. They were about separation between opposing states. So, this became the central idea of our show to be: change, opposing states and the grey zone between black and white.

With this in mind, we worked another 2 years on weaving an abstract story using our choreographic attempts as material. In my mind, this abstract story goes like this: a bunch of people have a very intense life leading them to a big catastrophe. It forces them to change into something new. Some members of the group become different from the others; the group has to evolve toward a new balance. In the end, the group finds this new balance and a new peaceful vibe.

Sounds weird, maybe… I know some spectators see something very different. That’s one of the pleasures of contemporary art: both the artists and the audience live something intense making your brain and heart rev in high gear, but this experience changes a lot from an individual to the other. We can chat about it after show…

What can audiences expect when they see Le Patin Libre?

What I like to pitch to people who are both unfamiliar with ice skating and dance is that what we try to combine athleticism and poetry. It is difficult to do both… But skating helps this rare alloy to happen.