Alexandra Park & Palace Charitable Trust (APPCT) embarked on a major restoration project in 2015 after receiving a substantial grant from the Heritage Lottery Fund to reopen the derelict Victorian Theatre for performance and to restore the East Wing of the Palace for the benefit of the public, fulfilling the Trust’s charitable purpose.

In 2016, construction contractors Willmott Dixon began the enabling works package to rid the site of asbestos and to provide modern services, including underfloor heating for the East Court. All site workers receive a short Heritage Induction about the listed building and its historic significance.  Working closely together, our project team encourage everyone to look out for fragments of material culture that tell their own unique stories. Discoveries made so far in different areas of the Palace where restoration work is taking place, give us clues about the people who have worked, visited or lived at Alexandra Palace since it was first opened to the public in 1873. There are hundreds of insights to be found and we are using them as the basis of new research to interpret and enrich the existing histories of the Park and Palace. 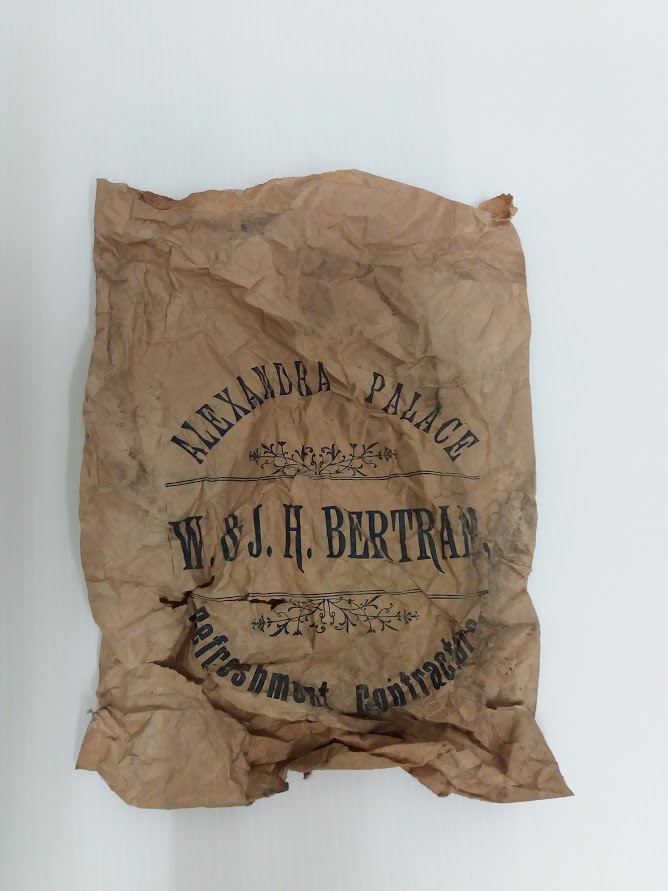 A paper bag found under the theatre floor

The art of food packaging was in its infancy when this paper bag was made for the Alexandra Palace “Refreshment Contractors” W. & J.H. Bertram. However, I am sure that the promotional opportunity was not lost on Messrs. Bertram when they were selling snacks to theatre goers at the Palace circa 1880. It is amazing to think that this piece of ephemera has survived for almost five generations and its branding is still clearly legible. Looking at this torn and crumpled old bit of paper, you can imagine yourself standing in the queue at the theatre bar or buying a bag of sweets from an usherette in the interval to eat while you watch the pantomime. Sometimes the most mundane objects have the most resonance and connect us to people just like us who lived more than a century before our time. 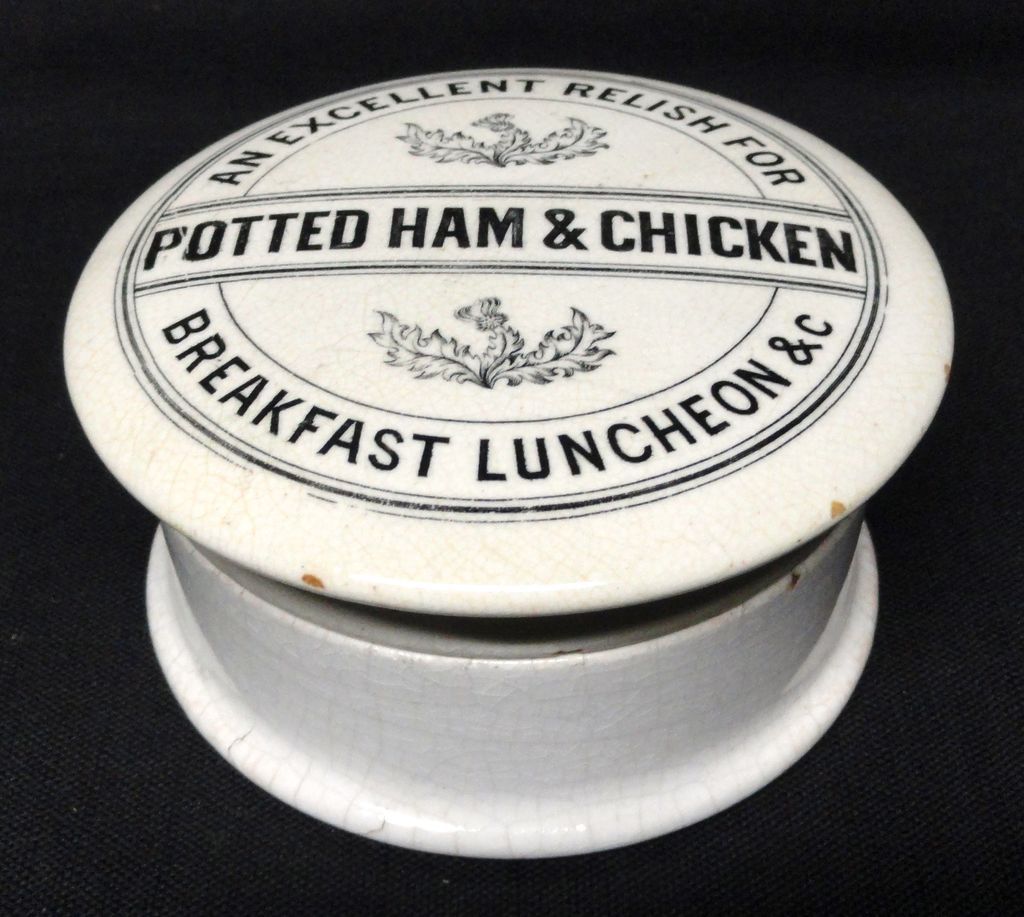 Pots like this were used in Victorian and Edwardian times to keep staple foods like meat paste from spoiling. This lid is decorated with Queen Victoria’s Thistle branch coat of arms and was sold by Fortnum & Mason, London. This high-end convenience food from a very prestigious supplier would have been served in one of the Palace’s many dining and refreshment rooms. Evidence of the deeply entrenched Victorian class system can be seen in the menus and programmes from the Palace’s early years which proudly offer 1st, 2nd and 3rd class dining options! 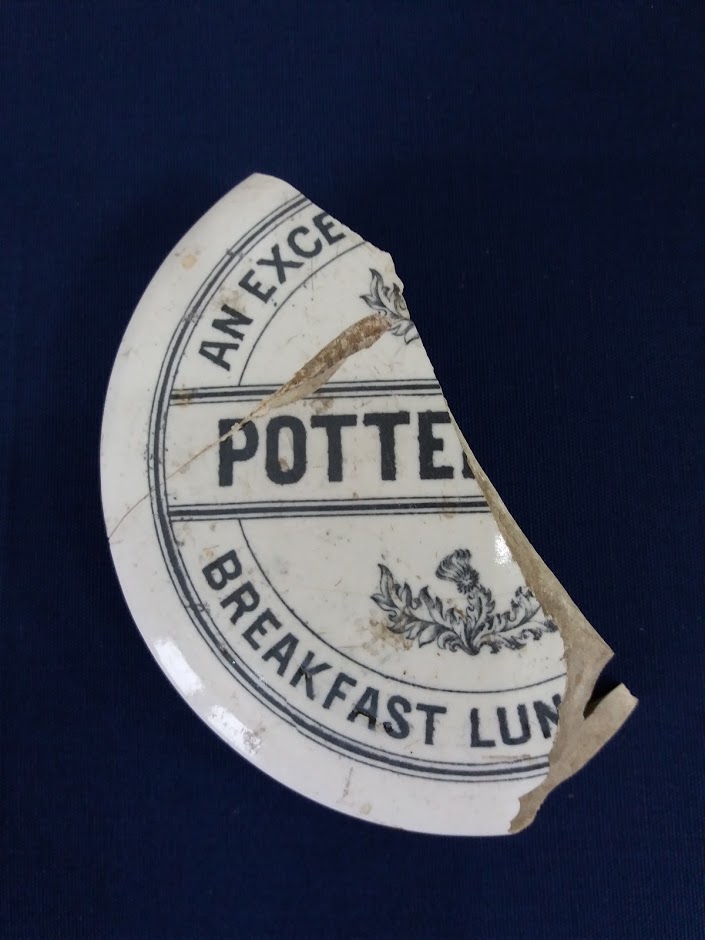 broken lid found in the Theatre 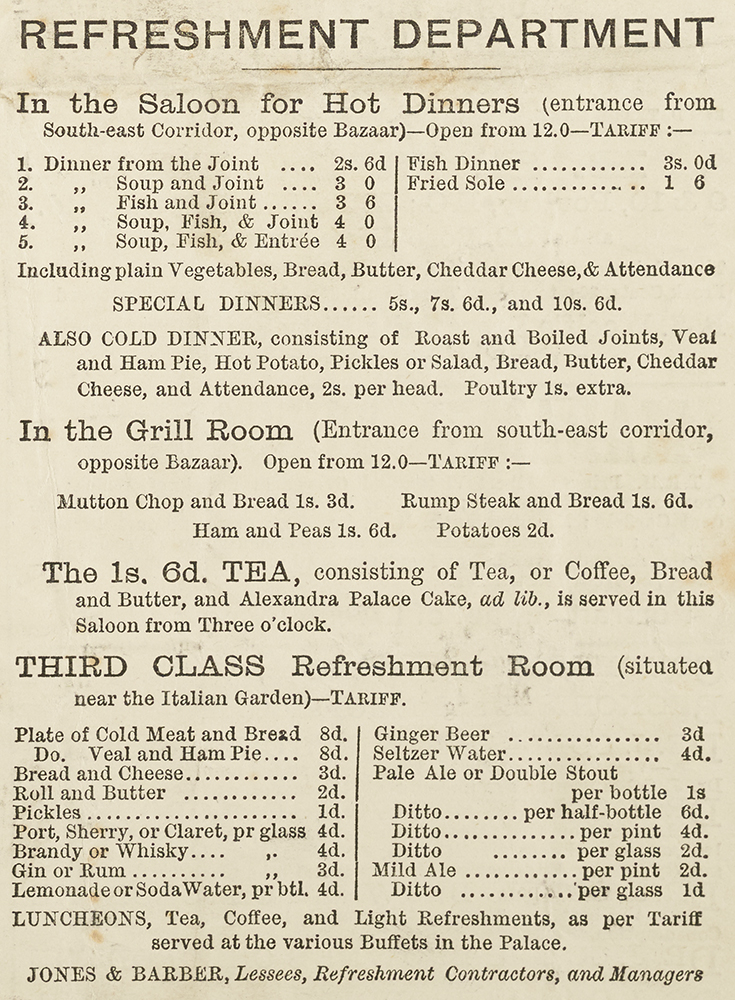 In 2016 our contractors discovered a large collection of historic photographs which had been lost because they had never been catalogued or formally archived. Prints, slides and negatives document decades of the Park and Palace’s history, activity and building works. Trade shows, exhibitions, events and commemorations are captured in these images telling fascinating tales of changing fashions, politics, attitudes and social mores. For conservation reasons we cannot yet display fragile paper objects and photographs, as sunlight, heat and fluctuating humidity quickly destroy them. Now scanned at super high resolution as a result of our partnership with Google you can see these and other collections on Google Arts and Culture. 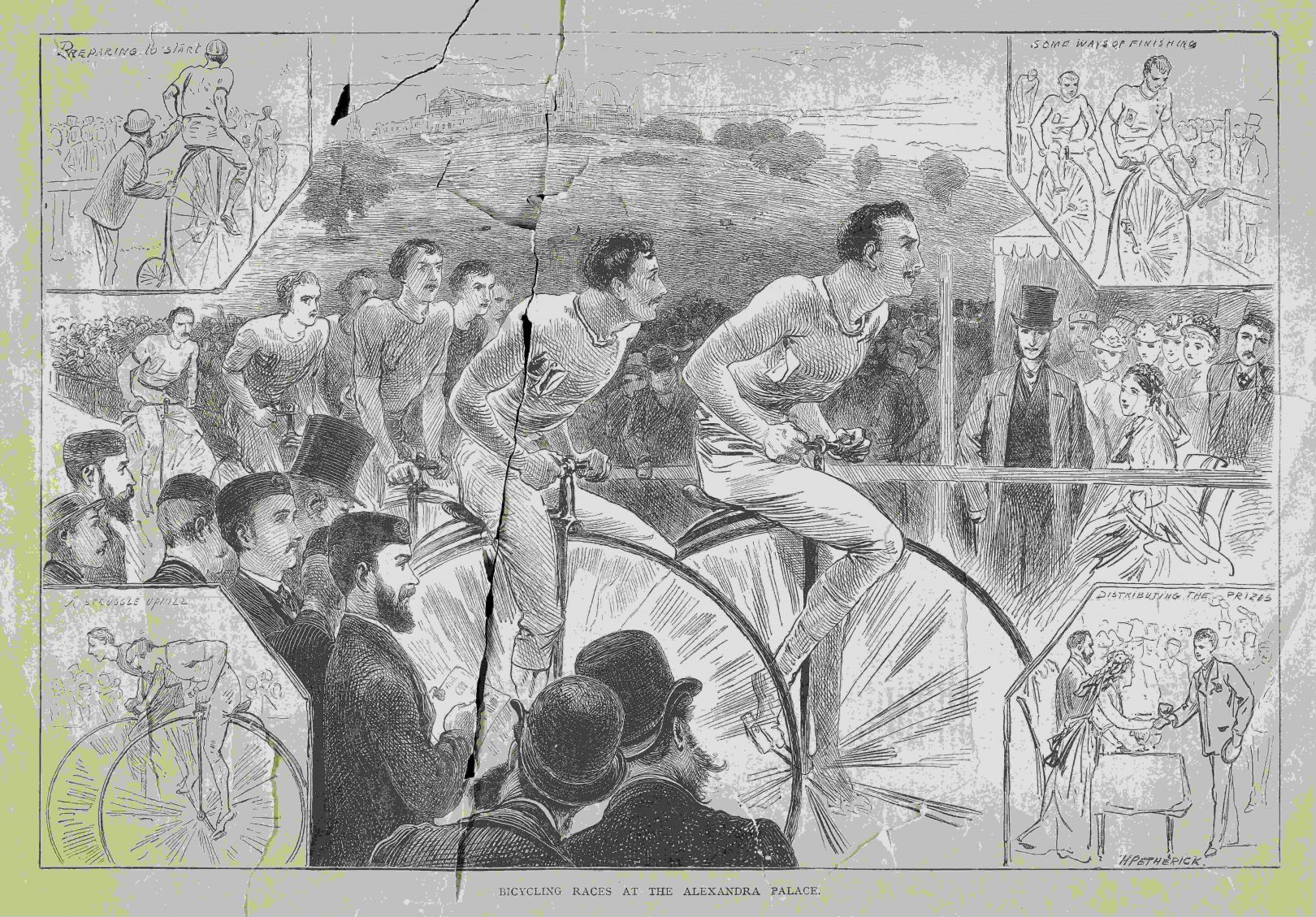 Bicycling at The Alexandra Palace

Ephemera like this rare cycling poster from May 1887 shows that Alexandra Palace was at the leading edge in hosting popular new sporting crazes. American cycling champions were the main attraction at this event commanding the high ticket price of One Shilling and an extra sixpence entry to the “reserved enclosure”! Poor quality paper stock was used for flyers, posters, programmes and tickets in the 19th century so we are very fortunate to have found this example and to be able to preserve it in our archive.

Decorative plasterwork fragments found while digging out a floor off the Theatre auditorium were a surprising find. The decorative motifs and vivid Cinquecento colours suggest that this may be material from the upper balcony which was removed in the early 1900’s and used as infill during subsequent remodelling of the Theatre. 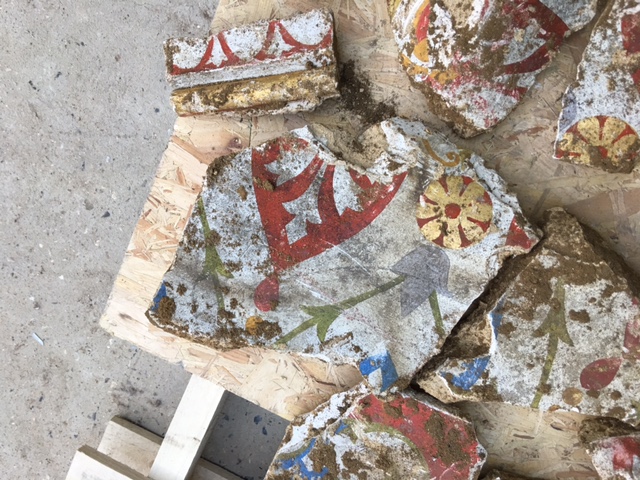 A mysterious hand – perhaps from a relief or sculpture (there were dozens of plaster busts decorating the Palace until the 1920’s) could belong to a goddess – Thalia the Muse of Comedy or Melpomene Muse of Tragedy stood on either side of the Theatre stage house. These sisters and daughters of Zeus entertained the gods on Mount Olympus. They were said to have the power to heal the sick and provide comfort to the heartbroken. Such is the power of theatre! Holding a broken stem or painting brush this hand might even belong to the goddess Minerva, whom legend has it descended from heaven to create the arts and sciences. We have no other clues as yet and haven’t found any other body parts or skeletons – fortunately for the project schedule! 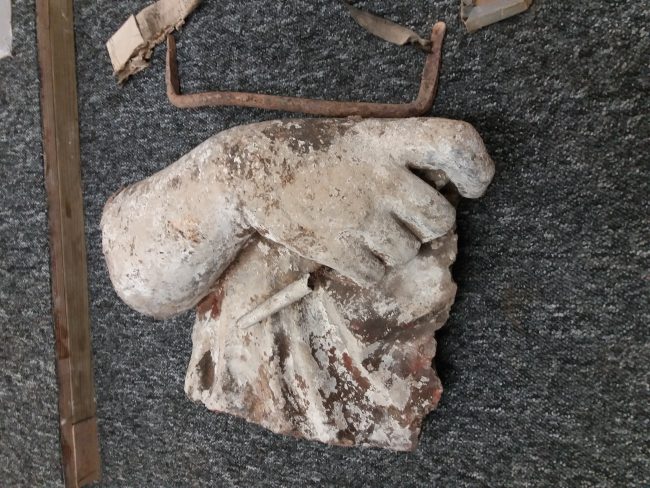 The most recent find in the Theatre is very exciting as it helps us to connect a performance at Ally Pally 115 years ago with a contemporary review in The Era – Saturday 24 May 1902. 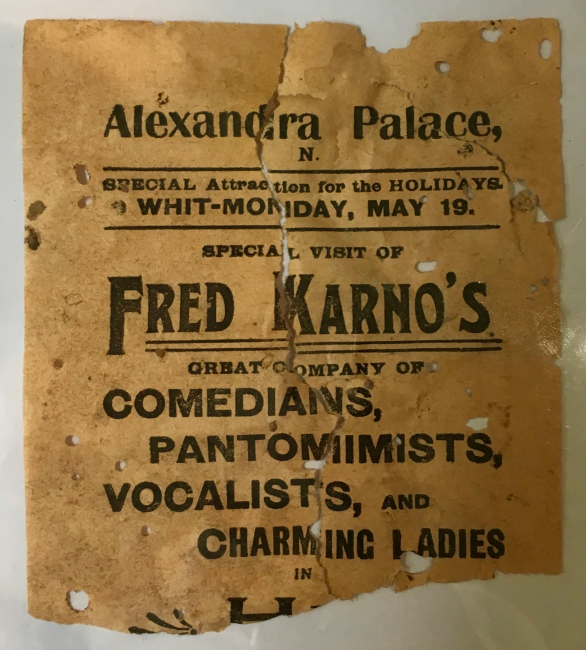 Advertisement for a performance by Fred Karno’s company

“Mr Fred Karno’s company appeared in their musical and pantomimical farce His Majesty’s Guests. The piece teams with fun and humour, and was received with roars of laughter by a crowded audience. Sergeant Lightning was a comical turn by Mr Fred Kitchen, his changes a la Blondi being very clever. Mr Wilford Howard made an effective Lord Easem, alias Flash Jack. Mr Charles Usher’s make-up as Mr Miffin was excellent. Mr Bert D’Arcy was a commendable Harry Miffin. The flunkey Bunker was well embodied by Mr Arthur Gallimore. Mr Frank Calbert was funny as Mr Minks. Mr George Rose’s Selina calls for special praise. The ladies were all good, Miss Jennie Bolton as Mrs Manley particularly so, whilst the portrayal of Lady Maude Easem, alias Maude the shoplifter, by Miss Florence Burns deserves the highest commendation, and the same remark applies to her singing. Some smart pantomime business was introduced, and came in for its due share of appreciation. The rest of the characters were ably supported.” 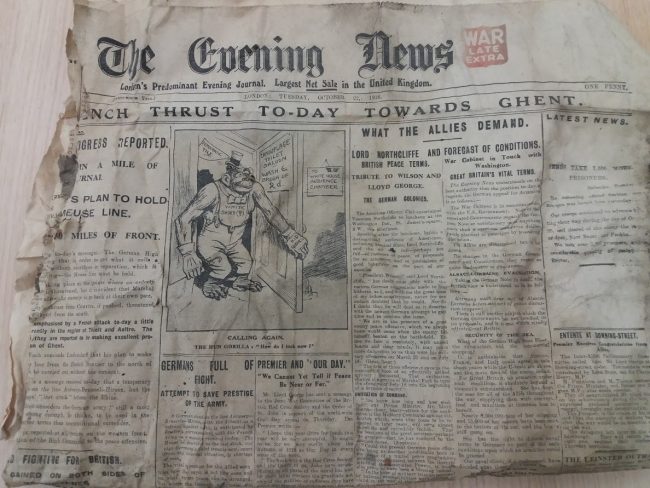 Of course we have found more common objects – coins, sherds of pottery and bottles. However the most unusual objects to turn up so far have been vials of Tetanus antitoxic serum. Remarkably, the packaging of some of these has survived 100 years embedded in a damp, cold wall of the Theatre so we can date them accurately to WW1 when our auditorium was used as a hospital for internees. They are branded Wellcome and marked 1915 which makes them very early examples – vaccinations were not rolled out to the general public until the 1930’s.

In the historic BBC television studios, some intriguing discoveries have been made. In Studio B where cladding was removed during asbestos decontamination, workers have revealed the original Victorian decorative scheme for the first class dining rooms. At the same time we uncovered a ubiquitous piece of chippie humour in graffiti: “The wages of sin is death, the wages of a carpenter is worse”. 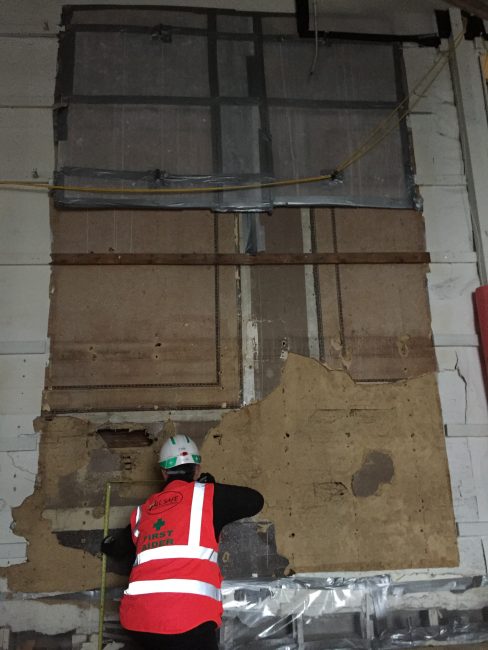 Uncovering the decoration in Studio B 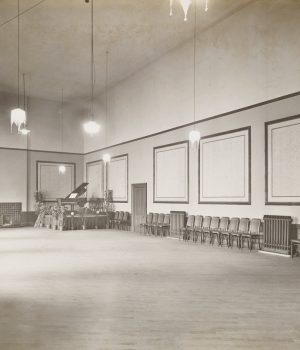 Dining room on first floor of South East Wing later converted by the BBC as a studio.

No doubt there are still many exciting stories to bring to light and we hope that the challenge of researching them and opportunity to engage new visitors will continue to inspire our work on restoration projects at the Palace.

The full article “Historic Finds at Alexandra Palace” is published by the Hornsey Historical Society in their Bulletin (issue 59).