In 2018 we reopened our Victorian Theatre following an extensive and sensitive restoration project. , This hidden gem was essentially frozen in time, having lain empty and hidden within Ally Pally for over 80 years. Yet less than a year later in September 2019 it was to play host to the event of London Fashion Week with Simone Rocha’s Women’s Spring/Summer 2020 Show.

Indeed it was the ‘arrested decay’ restoration of the Theatre which first appealed to the client whose collection, influenced by Irish folklore with elements faded grandeur chimed perfectly with the setting.

Playing host to LFW was an historic event for both Ally Pally and Fashion Week itself: due to the busy schedule of shows, designers almost always choose venues located within London’s Square Mile but Simone Rocha was nevertheless able to convince the Fashion Council that hers had to take place at Alexandra Palace Theatre.

After the first site visit it was clear that this was going to be an event like no other. The layout of the venue itself was flipped, with the back-of-house area being used as the main entrance for the high profile guests; our standard main entrance into the building hitherto became the event’s back-of house area for the models. This set the tone from the start, giving the guests a very different experience and a glimpse into an eerie, ram shackled part of the Palace leading into the show.

Shifting away from the traditional runway, Rocha was looking for the show to be performed in a circle: her original inspiration for the collection was the Irish Wren Boys who historically danced and played music in circles. The flexibility of the retractable tiered seating in the Theatre was perfect for accommodating this, creating a unique and intimate environment.

The show was met with widespread acclaim and was attended by high profile guests and celebrities including singer Paloma Faith, designer Lulu Guinness, entrepreneur Lauren Santo Domingo and editor in chief of Vogue, Anna Wintour. 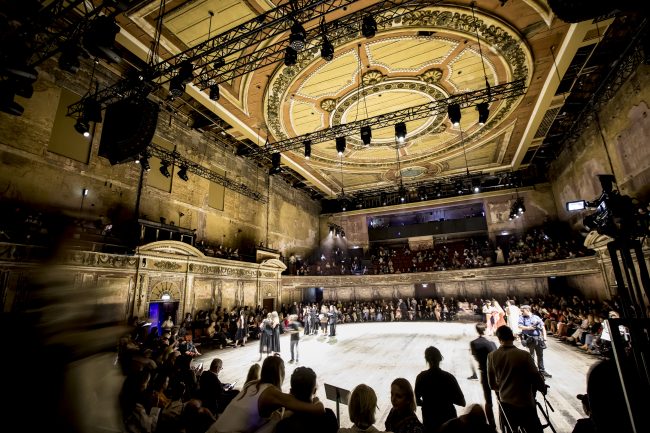 “They’ve tried to preserve the crumbling plaster, and the result is magical. If I could’ve built the set of my dreams from scratch, that’s what it would look like. We removed all the chairs. It was a bit of an endeavour. Totally worth it, though.”

“This season, Rocha has chosen one of her most dramatic backdrops to date: A restored Victorian theatre that was closed to the public for 80 years. Located in the East Wing of London’s historic Alexandra Palace, which was built in the 1870s, the theatre was reopened last December following an extensive multi-million-dollar renovation. With much of the original structure preserved, the space appears frozen in time, its high-tech lighting and sound equipment hidden beneath peeled paint and faded floorboards.

The main venue space at “Ally Pally,” as it is known by Londoners, has hosted shows by the likes of Jay-Z, The Rolling Stones and Florence and The Machine in recent years. But on Sunday evening, its newly-opened theatre provided an atmospheric backdrop to Rocha’s evocative new collection — an inventive womenswear line that linked to her Irish heritage and proved why she is one of fashion’s most talked-about designers.”

“Alexandra Palace staged the first fashion show in its storied history last night as Simone Rocha lifted the curtain on her latest collection in the iconic venue. As the fashion press took their seats on the balcony of the recently restored Victorian theatre, which reopened last year after an 80-year closure, it soon became clear that the designer was intent on putting on a spectacle befitting its surroundings.”

“Staged inside a totally decayed grand old theatre within Alexandra Palace, which was built on Muswell Hill, the highest overlooking London. The aged pine floorboards and raw space were the ideal juxtaposition to the clothes – an amalgam of haute romanticism, druid chic and posh punk. Everyone in London calls this rather wrecked structure Ally Pally, a term of endearment for a revered friend, which captures the reaction to this special collection.”

“Folklore, faded grandeur, beauty and something subtly sinister were all elements in Rocha’s show. The designer emphasised the theatricality of the wren boy tradition by holding her show in a recently restored Victorian theatre at Alexandra Palace, complete with gold walls and cornices, high ceilings and a heightened sense of time-lost splendour.”