The BBC arrived at the Palace in 1935, bringing the latest invention in entertainment – television. With performances now broadcast directly into people’s homes the Theatre was closed to live productions.

The BBC leased the entire East Wing of the Palace. Former dining rooms were fitted out with the latest, cutting-edge technology. In Studio B the Baird Company installed an electro-mechanical television system using dangerous spinning discs and tanks of chemicals. In Studio A Marconi-EMI used a brand new “electric-eye” Emitron Camera. Operating on alternate weeks the competition was won by Marconi-EMI whose 405-line television system created television as we know it today. 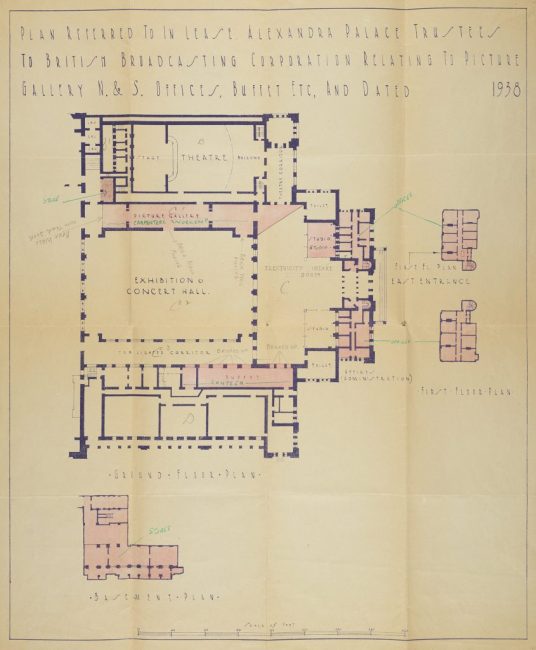 As well as studios, the BBC needed offices, transmitters, make-up rooms. The East Court became a garage for the fleet of outside broadcast vehicles and the Theatre was used as a carpentry workshop and to store the sets and props for the television service. 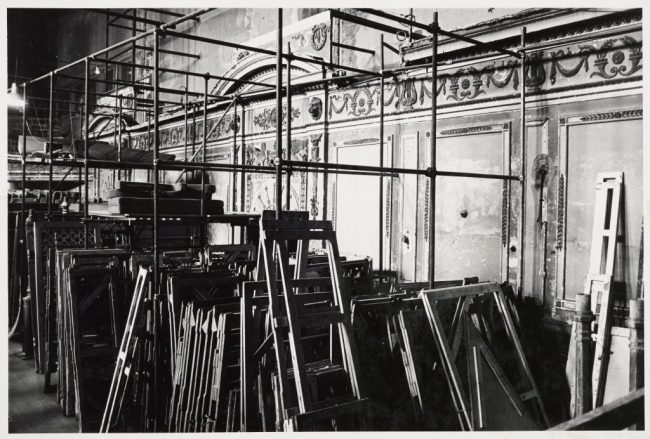 Following the launch of television on 2nd November 1936 the fledging service quickly grew in scope as experiments lead to new forms of programming. The BBC realised they would need to expand from the small studios and turned to the Theatre to create a third. From 1938 plans were drawn up to adapt the Theatre into Studio C. Maintaining the proscenium but removing much of the rest of the fabric, it would have allowed for much grander productions.

The proposed layout was ahead of its time. It featured a central camera bank, with a series of sets arranged in a semi-circle, to allow for multiple scenes. At the time all performances were live, meaning small sets, or actors were required to run down the corridor between studios and not appear out of breath. This multi-stage set-up would later become the norm for the live filmed sitcom format used by Dad’s Army and Friends. 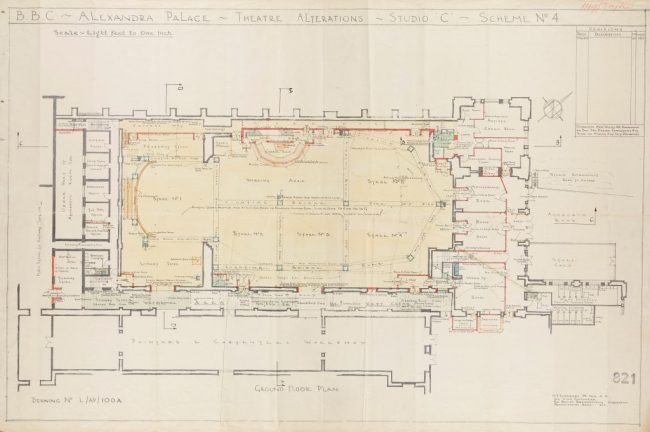 Ultimately plans were stalled by the interruption of the Second World War, which closed the television service. When television resumed in 1946 a new location was sought, with some production moving to Lime Grove.

The BBC studios at Alexandra Palace created television formats still around today, the gardening programme, cookery shows and the revolutionary election broadcast created by Grace Wyndham Goldie. The first dedicated children’s programme was launched in 1946 with its star Muffin the Mule.

The Theatre was filled with props and scenery used for every imaginable production, from Elizabethan villages to modern police offices. Productions varied with many cabaret shows featuring a simple but dramatic backdrop, whilst others required complicated arrangement of set pieces within the tight confines of the studio. 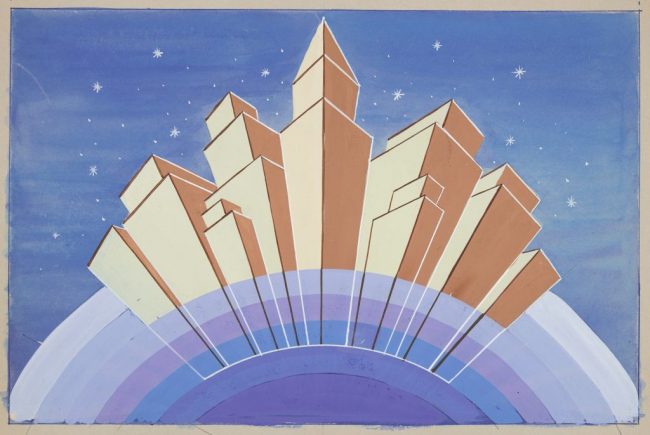 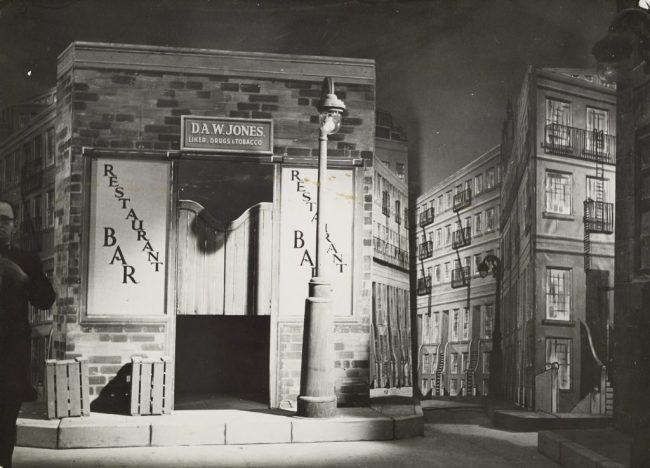 After the BBC left in 1969 the studios were taken over by the radical Open University, broadcasting educational programmes until 1980, when disaster struck Alexandra Palace.

A second fire devastated the Palace on 10th July 1980. By luck, the Theatre was spared the worst of the destruction. The fire raged throughout the entertainment complex but stopped upon reaching the dressing rooms, leaving the auditorium miraculously unscathed. There are stories of a fireman instructing crews to focus on protecting the Theatre which could also have been spared due to fortuitous wind conditions or its proximity to a large supply of water. With the rest of the Palace smouldering and in need of rebuilding, the Theatre was left to continue its slow and steady decay.

With the support of the Heritage Lottery Fund, partners and countless individuals, the Theatre will finally awaken from its lengthy slumber.