Hugh Macpherson, Secretary to the Alexandra Palace Organ Appeal, explains the history behind one the venue’s gems

The great arts and entertainment complex that is the Alexandra Palace contains a musical treasure that is unknown to most of the public.

When the original Palace was built in 1873 Henry Willis, the greatest organ builder of the Victorian age, was commissioned to build a mighty instrument for the Great Hall. Having finished his monumental organ in the Albert Hall two years earlier Willis was the man for the job. However, just two weeks after the Palace was opened disaster struck and fire destroyed the building including the organ. The ashes were barely cold when Willis was commissioned to build a new organ for the second incarnation of the Palace which was completed in 1875.

This organ soon gained a reputation as the finest concert organ of the age. It’s bellows were steam driven so a day’s notice had to be given before the organ could be played.  Then came the First World War. The Palace was closed and the Great Hall was used for housing internees and refugees. They were issued with oil stoves and blankets so that at the end of the war the organ was choked with fluff and had been covered with a deposit from the oil stoves leaving the instrument unusable but basically sound. Then the hall was used by the army for “the liquidation of munitions”. The organ was broken into and soldiers scattered the pipes far and wide. Some were found on the rail track running down to King’s Cross. The vandals who had done this were wearing the King’s uniform. There was a court martial but compensation was little and late. During the 1920’s various fundraising efforts were made but nothing really materialised until the death of Queen Alexandra in 1925 when, with the blessing of King George V it was decided to restore the organ as the people of North London’s tribute to Queen Alexandra. 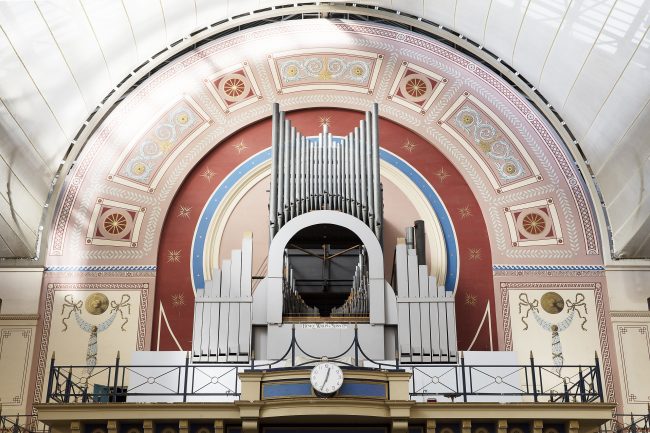 Henry Willis III, grandson of the original builder, was called in and work proceeded apace. The restored organ was opened by the Lord Mayor of London in 1929 with considerable ceremony. This marked the start of the golden years of the organ. Organists from all over the world came to play and many recordings were made. This was when the famous French organist Marcel Dupre called it “the finest concert organ in Europe”.

At the start of the second world war the hall was closed, the organ being used only for private practice. In 1944 a VI flying bomb struck just behind the North side of the hall blowing out the great rose window behind the organ which was exposed to the elements, at one point it was covered with snow! The pipework was taken out and stored on the hall floor where it was again the subject of vandalism. At this point the Palace was owned by the Greater London Council who put the organ up for sale. There was outrage in the country with questions in Parliament. Eventually Henry Willis IV bought the surviving pipework “on behalf of the nation” and stored it at his factory. The very large façade pipes were too large to move and remained in situ.

Then in 1980 came the catastrophic fire which destroyed much of the Palace including the Great Hall. A charity was established called The Alexandra Palace Organ Appeal to raise funds to restore the organ. In 1982 the first part of the restored organ was installed by Henry Willis IV and the Great Hall once more resounded to its music. The Organ Appeal has now installed 49 stops out of an eventual 98. A stop is the individual rank of pipes controlled by a stop knob on the console, in fact that is the origin of the term “pull out all the stops”. This means that we have half of the ranks of pipes (or stops) installed.

The Appeal in conjunction with the Alexandra Park and Palace Charitable Trust regularly stages fundraising  concerts using the organ.  The charity is always on the lookout for volunteers to help with organisation and fundraising.