Our Tree of the Month is the Common Ash (Fraxinus excelsior). The most famous ash was probably Yggdrasil in Norse mythology. It was the Tree of Life or World Tree connecting everything together.

Our tree is not so big. It can be found about half way along and just below the Lower Path that runs from near Alexandra Palace Station below the main part of the south slope to the Farmers’ Market area and out by the Victoria Stakes. Standing on its own, it has two elegant, curved benches at its base – check out the inscriptions. 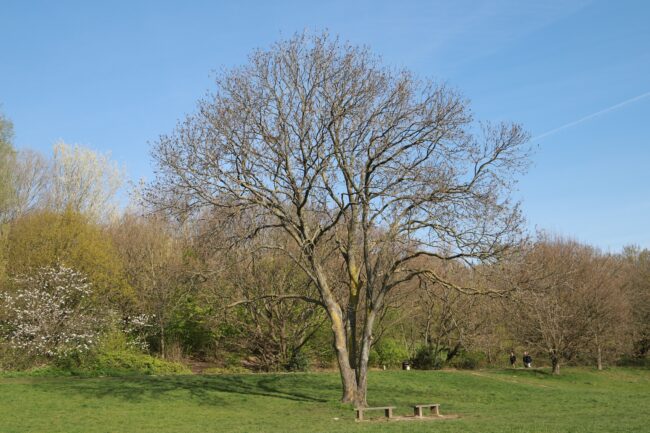 The ash is still bare of leaves, but has flowers on the twigs. This tree is not only late to acquire its leaves, but will be among the first to lose them in autumn. One leaf is composed of the order of nine leaflets and each leaf appears with its pair opposite it on the branch. Throughout the winter, this is one of the easiest trees to identify as it is adorned with strikingly black buds.

The flowers develop into seeds called “keys” which, in a similar way to maple seeds, are dispersed by the wind. 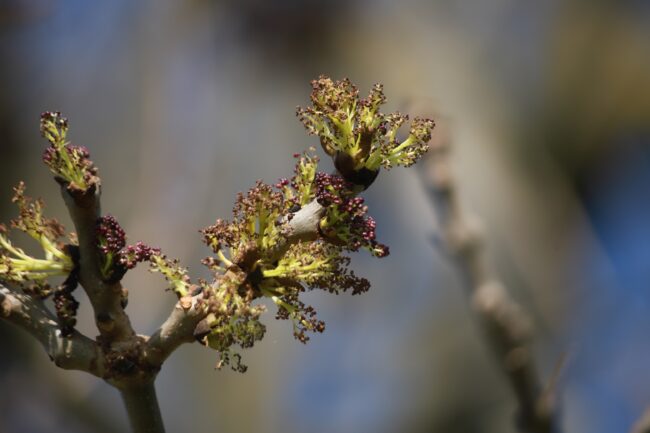 Up on ash trees you will often spot round clusters, these are galls, distorted flower growths, caused by mites which do no serious harm to the tree.

The ash readily self-seeds in newly cleared areas – it is known as a “pioneer species” along with sycamore and birch.

Our tree of the month is not only a common native in this country, but can be found over most of Europe as well as the Caucuses.

The wood can be burnt while newly cut as described by Walter de la Mare in his poem “Trees”:

“Of all the trees in England,

Her sweet three corners in,

Only the Ash, the bonnie Ash

Burns fierce while it is green.”

When quite young, it can be made into walking sticks. The wood is strong and light and came into its own in the First World War when it was used for aeroplane manufacture.

In earlier times the wood was used for spears. Homer’s Greek hero, Achilles, was said to have a spear fashioned from ash.

Ashes are under threat at present from an introduced fungus known as ash dieback which can rapidly kill young trees. It is already present in our park, but nature will take its course as resistant ash trees should re-populate areas hit by the disease.

Another less damaging fungus associated with ash are King Alfred’s Cakes. These round, black balls of saprophytic fungus (ones that decay dead material) are often seen on dead or dying branches.

Contrast this tree with the green ash from America featured in October, its leaves are already appearing on the trees lining the main road just below the Pitch and Putt Course.