Stephen Middleton from the Friends of Alexandra Park is kindly introducing some of his favourite trees from across the 196 acres of our park. Here is his selection for April:

Standing on the terrace below the BBC Tower you can be blown away by the pink blossom of the cherries below. However, our Tree of the Month is the golden weeping willow (Salix × sepulcralis ‘Chrysocroma’), which can be seen just below the cherries. After pushing out its first leaves last month, which were almost yellow, the tree will gradually change through lime green to green. 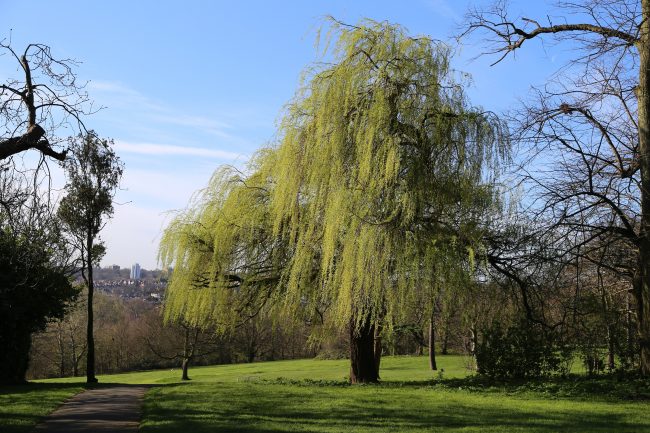 The ’x’ in the scientific name indicates that this tree is a cross between two different willows, in this case our native white willow and a Babylonian or weeping willow from China. This particular hybrid first went on sale at the end of the 19th century in Berlin.

Suitable parents… The white willow gene pool helps the hybrid cope with late frosts and is more resistant to canker diseases. The Babylonian willow gives the hybrid its weeping form.

The golden weeping willow has yellow catkins that can be seen hanging down with the foliage. The long, thin leaves give the tree a beautiful, feathery, curtain-like appearance. This weeping willow will hold on to its leaves well into autumn. A poem published by William Carlos Williams in 1921 encapsulates the tree in the countryside later in the year.

It is a willow when summer is over,

a willow by the river

from which no leaf has fallen nor

bitten by the sun

The leaves cling and grow paler,

over the swirling waters of the river

as if loath to let go,

they are so cool, so drunk with

the swirl of the wind and of the river—

the last to let go and fall

into the water and on the ground.

The golden weeping willow is now the most popular weeping tree and can often be seen gracing riversides and lakes.

Although willows can help stabilise river banks by lessening soil erosion, the main use for this tree is purely ornamental. Who doesn’t love to sit in the dappled shade underneath one of these trees on a sunny day? Take a short walk to the boating lake and admire more examples of these striking trees on the island.

Looking for something with more blossom? If you have a spare moment then walk alongside the reservoir towards Newland Road and through the tunnel of white flowers from our native wild cherries. 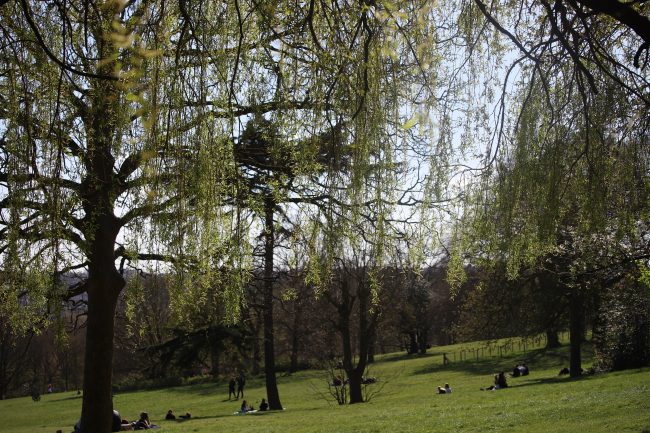