Stephen Middleton from the Friends of Alexandra Park is kindly introducing some of his favourite trees from across the 196 acres of our park. Here is his selection for May:

The 9th May is Chestnut Sunday (the closest Sunday to 11th May). This was a popular day with people visiting parks to see long lines of flowering Horse Chestnuts (Aesculus hippocastanum), our Tree of the Month.

There is an excellent avenue of horse chestnuts along the eastern edge of the Pitch and Putt starting from Alexandra Palace Way. You may notice some replacements which are mostly Indian horse chestnuts for reasons which we will come to later. 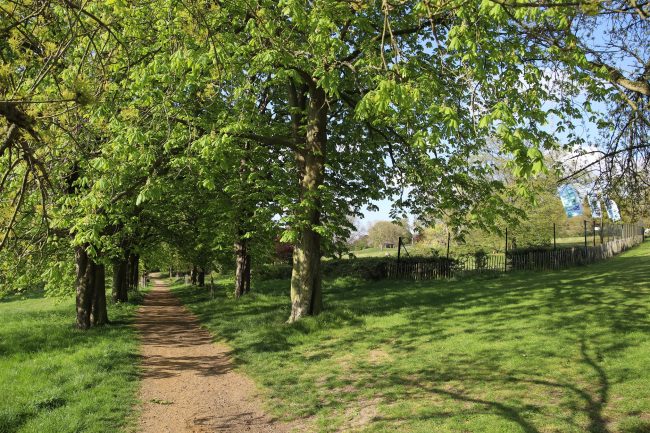 The flowers open gradually from the bottom of the “candelabra” upwards. If you look carefully the flowers are initially white with a yellow patch to attract bees which pollinate the flowers. When the flowers have been fertilised the yellow area changes via orange into red. 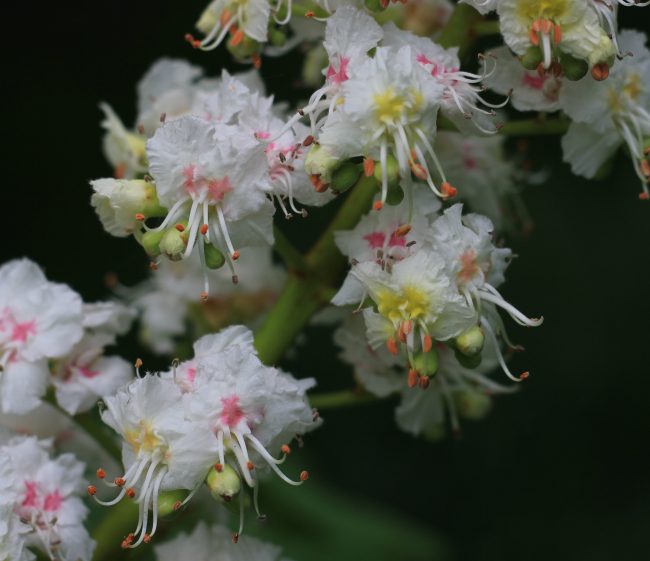 Horse chestnuts were imported into this country from the Balkans in the early 17th century as a tree prized for its flowers. The wood is not very rot resistant or very hard. It had some use in low quality furniture and as charcoal for gunpowder.

In recent years, the tree has suffered from a leaf-miner moth caterpillar. The adult moth lays eggs on the top of the leaf then the hatched caterpillars eat the substance of the leaf between the upper and lower surfaces. This gives the trees a sad look in late summer. The Indian horse chestnut, a related species, is not affected by the moth and is now being planted more often.

There are several ideas for the origin of the name of this tree. Obviously “chestnut” comes from the similarity of the fruit to the unrelated sweet chestnuts. One of the many possible reasons for the ”horse” part might be referring to an old practice of feeding the fruit to horses which are suffering from “broken wind”.

A spikey shell covers the conker. Children attach the hard nuts found inside to a piece of string hoping for a possible champion conker. This game can also be taken very seriously with the annual Conker Championship being held on the second Sunday of October in Southwick, Northamptonshire.

For a mix of different horse chestnut species, walk down the tarmac path from the rose garden and admire the red and indian horse chestnuts as well as a yellow buckeye lining the path. 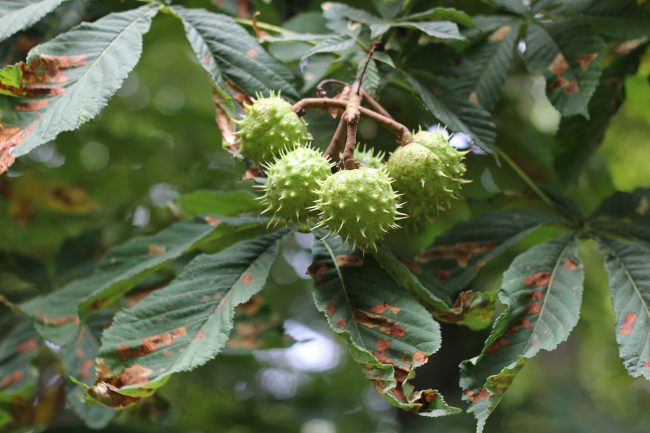