Throughout 2021 Stephen Middleton from the Friends of Alexandra Park introduced us to some of his favourite trees from the Park. We loved hearing about them and people told us they did too. So we’ve asked him to keep going (with over 7,000 trees in the Park, there’s still plenty to get through!). Here is Stephen’s tree of the month for January, 2022.

Holm Oak (Quercus ilex) is the oak that looks like a holly and is our January Tree of the Month. Unlike our native oaks, this tree is evergreen and some of its leaves, especially lower ones, resemble the holly, our only native evergreen. Our tree is to be found in The Grove. Walk up the southern path from The Grove Car Park and you will find a stately tree about 30 metres on the right at the first path junction. The Grove is the far western area of the park linking it to the Parkland Walk.

Holm oak’s scientific name is Quercus (meaning oak) ilex (meaning holly) so other oaks that you may come across will all have the name Quercus plus something…..

Holm is an old name for holly which ties things together. Other individual holm oaks have thinner leaves and can be mistaken for olives. Holly and holm oak leaves are always quite thick and waxy enabling them to better resist drying out. The bark of this tree is quite dark and divided into small blocks. 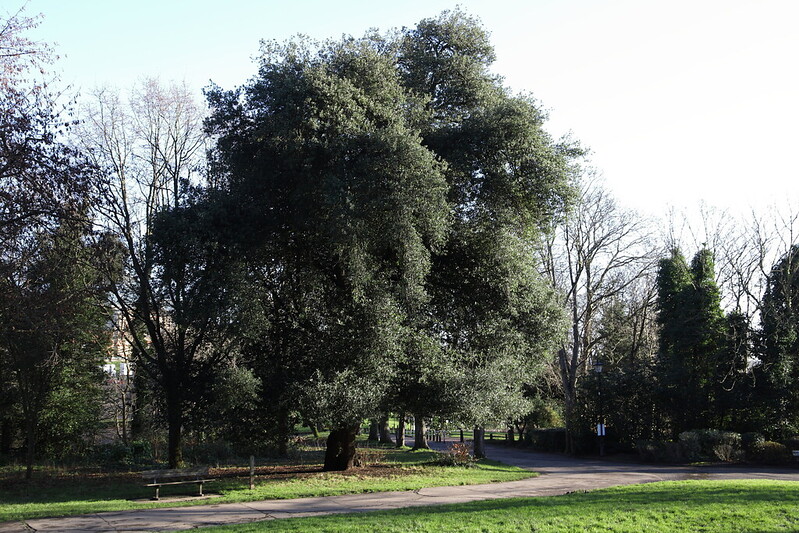 May or June will see a lot of the leaves falling (they last two years) as well as the appearance of the catkins and small flowers. The flowers later evolve into acorns which jays find particularly palatable.

First brought into this country in the 1500s, this tree copes well with coastal winds and salt spray. It has spread in the wider countryside especially in southern England. As well as growing into substantial trees of up to 20 metres, they can also be used as hedging.

The holm oak’s native range extends from southern China across to southern Europe and North Africa. There are also examples growing 1,000 metres up Mount Etna. Romans and Greeks used tannin from this tree to soften leather and the wood for tool making. Spaniards have used the trees for charcoal and they feed the acorns to pigs to make Ibérico Ham. The tree is more generally used for tool handles and furniture. Holm oak can be a home to truffles and you can even buy young trees already impregnated with the fungi. 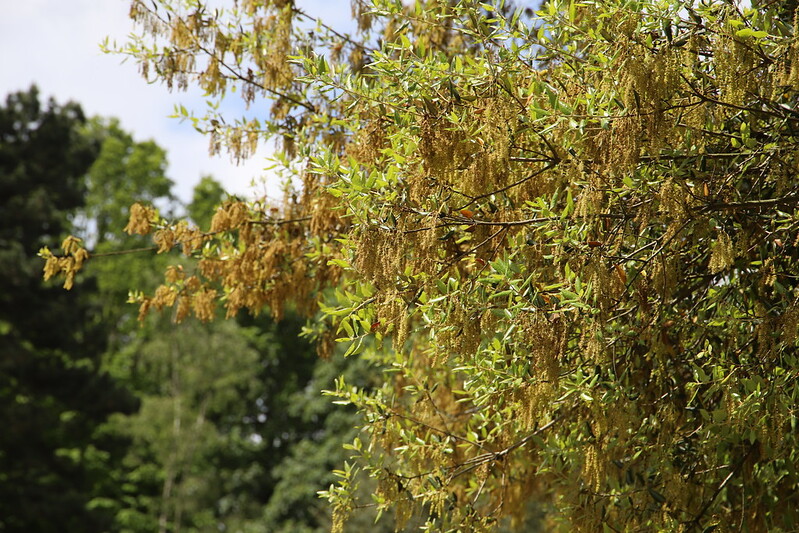 There are other holm oaks scattered around the park, some planted and some self seeded. None, however, are as grandiose as this example in The Grove.

What else looks good this time of year? See if you can find a quite newly planted Persian Ironwood. This tree is in flower (small red ones) just the other side of Alexandra Palace Way directly opposite the road exit from The Grove.

Tree of the month: December