“The big, branched clusters of bloom which appear in late spring, when the leaves are half grown, light up the whole tree with their yellow petals” so said American naturalist, Donald Culross Peattie.

When the American colonists first saw conkers (the nut of this tree) they were reminded of the eyes of a deer. The trees became known as buckeyes – in this country we call them horse-chestnuts. Our Tree of the month is the Yellow Buckeye (Aesculus flava). The flava part of the scientific name comes from the Latin for yellow.

They were first brought to Britain in 1764 from their home in the Eastern United States. The most concentrated native population is in the Great Smoky Mountains on the Tennessee/North Carolina border.

Our particular tree is east of the BBC Tower below the rose garden on the left hand side of the path, the second tree down. It was planted not too long ago, but is already producing a blast of colour. 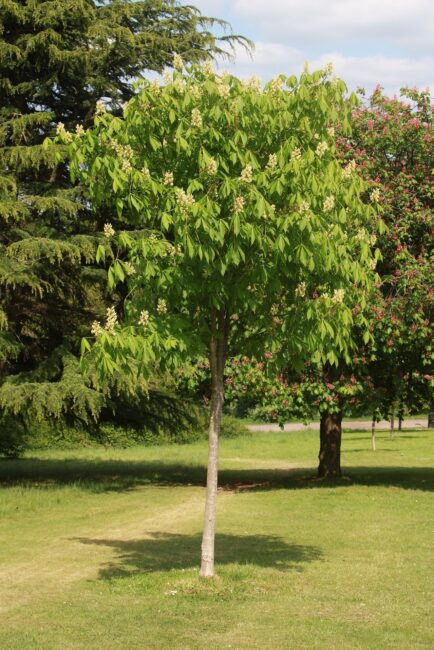 The flower’s background is a pale yellow. On this, like our common horse-chestnut, it starts with bright yellow patches which change colour to red when the flower is pollinated. You may spot some of the bees flying from one flower to another picking up nectar and transferring pollen as they go.

The leaves are described as palmate as they are usually divided into five leaflets making the form of a hand.

The fertilised flowers developed into a fruit with a smooth shell covering unlike the spikey ones on the horse-chestnut. The nuts were often carried in the pocket for good luck. 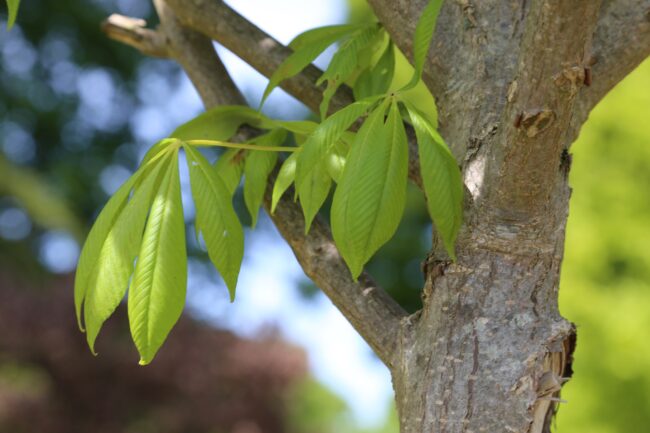 In the two lines of trees either side of the path by the buckeye are horse-chestnut, red horse-chestnut and indian horse-chestnut together with two unrelated walnuts. A great place to compare some different examples of these Aesculus trees.

The nut of the tree contains poisons called saponins (glucosides). The native Americans ate these nuts, but only after roasting, peeling and then soaking them which was believed to remove most of the poison.

The wood is quite light and easy to work with, but not very durable and subject to rotting which largely limits its use to cheap furniture and boxes.

On the up side it makes a beautiful ornamental tree and it doesn’t suffer from the leaf miner that causes the horse-chestnut leaves to turn progressively brown from summer onwards.

There is one other larger tree of the same species in the park, but it is hidden in the edge of the field containing the Go-Ape structures. 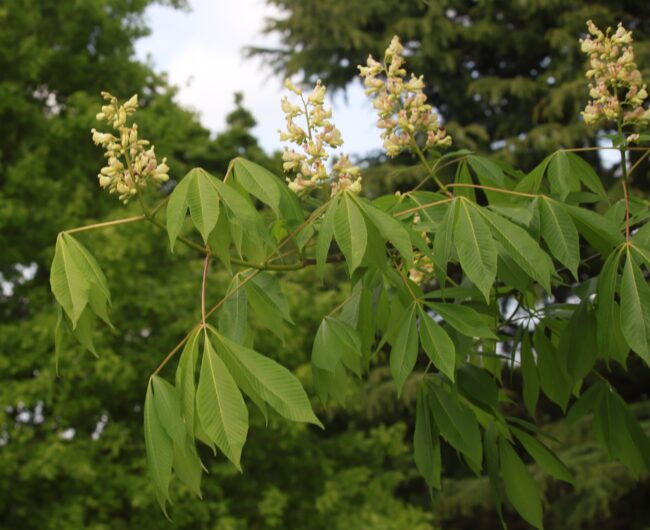