In 1996, the United Nations General Assembly proclaimed 21st November as World Television Day, in recognition of the increasing impact television has had on decision-making by alerting world attention to conflicts and threats to peace and security and its potential role in sharpening the focus on other major issues, including economic and social issues. As the birthplace of regular high definition television, from November 1936 Alexandra Palace has had a longstanding connection with the BBC.

To mark World Television Day, APPCT Learning & Participation team ran a “Fake News” conference for 110 Key Stage 3 (11- 14 year olds) from Barnet and Haringey. The morning began with a talk by the Palace’s curator about the history of Alexandra Palace, in particular its link with the BBC. To give the young people attending different view points on Fake News we invited Jonathan Freedland (Weekly Columnist and Writer for the Guardian), Mark Frankel (Social Media Editor, BBC News) and Dr James Rodgers (Leader, International Journalism Studies’ City University) who gave their personal experiences with Fake News, earliest examples of the phenomenon and also their opinion about why it had become more prevalent in the last few years. 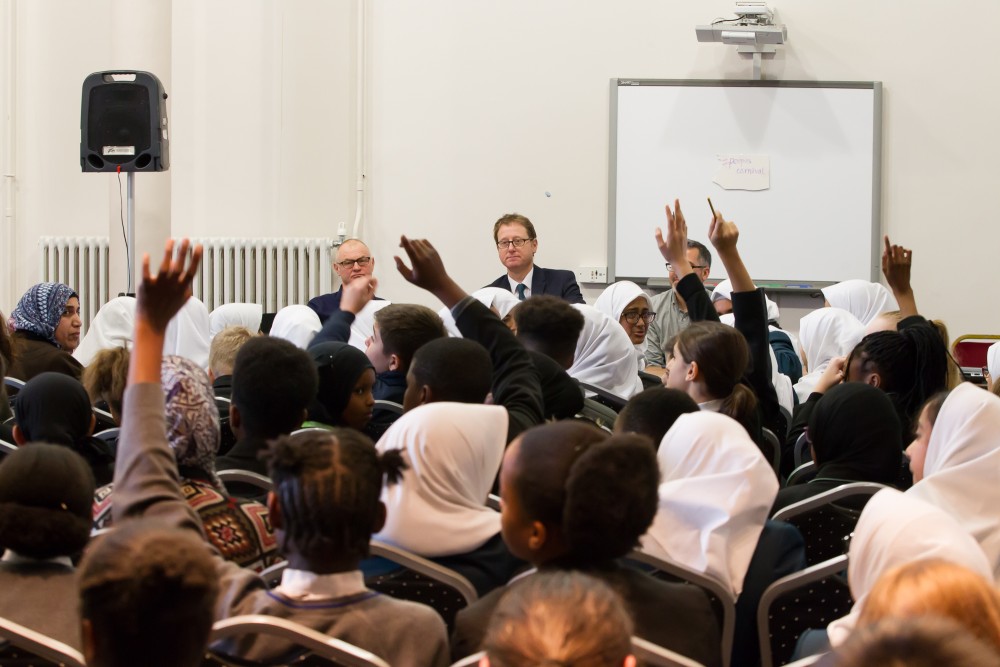 To encourage the young people attending to start thinking before sharing stories on social media, BBC School Report piloted a number of the new resources. Students were split into groups of 5, with topics for discussion including “trusted sources and telltale signs that a story could be untrue”. Given that many people now check Twitter for live news updates and that many organisations rely on user generated content, a number of checks were suggested about the authenticity of twitter accounts including blue ticks for official accounts, spelling (and grammar) and the number of followers.

Students from Grieg City Academy and Highgate Wood School wrote about their day: –

We started the trip when we walked to Alexandra Palace. We took the ‘shortcut’ which involved steep uphill climbs and mud coated shoes and dirty trouser bottoms. It was worth the workout though, because inside the building there were seats.

We then started to learn about what fake news is and how to spot it at around 10:45. There were three people talking about fake news. The first one was Jonathan Freedland, a writer for The Guardian.  The second was Mark Frankel, the Social Media Editor for BBC News. The third was Dr. James Rogers, a leader of International Journalism Studies at the City University. They all spoke about what they did and how to spot fake news in context. 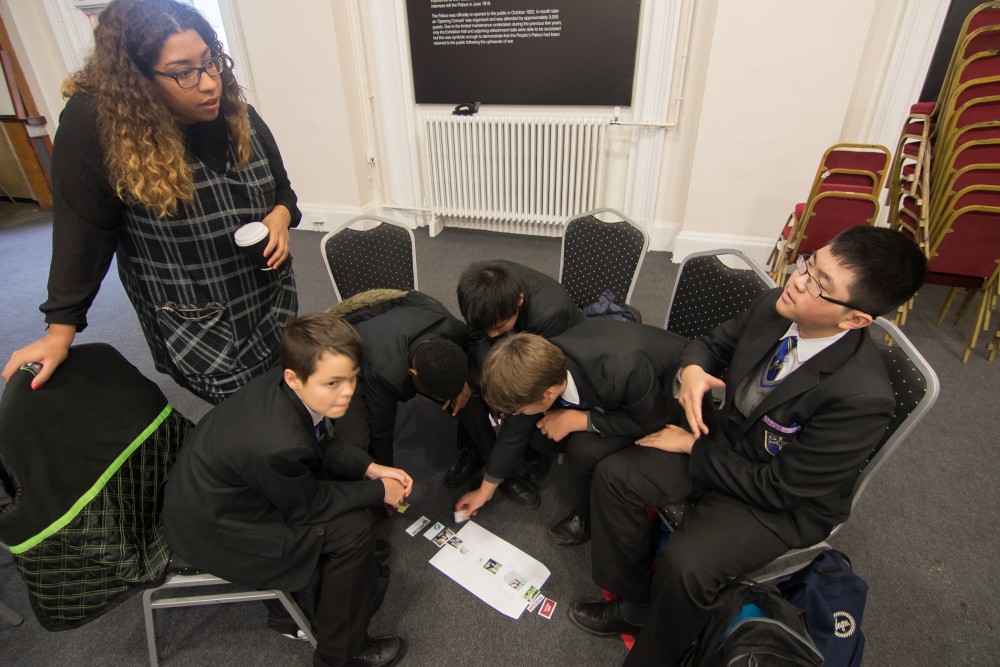 For the first part of the day, we had to make an exhausting journey up the muddy, slippery hill in order to reach Alexandra Palace. At first, I felt restless and tired, but in the end, the beautiful view was so worth it! I couldn’t take my eyes off the microscopic figures and buildings. I have never actually noticed how very tall the Shard is. Even though the view was amazing, I had to go inside at some point. We walked into a very echoey room and found ourselves some seats they had arranged for us. We were first taught about the history of Alexandra Palace, which was so intriguing. Then, a man called Mark Frankel, from BBC News, gave us a few examples of fake news, which was very eye opening. After a few more talks, we went outside for a short break which lasted around fifteen minutes. The breeze was so lovely. When break was finished, came the most exciting part of the day. We got into groups of five and discussed which sites were the most trustworthy and how to spot fake news. We had an interactive session with Dr James Rodgers, an International journalist, and Jonathon Freedland, a writer for the Guardian, where we had to point out the fake news. It was so fun! Now I feel more confident when online and knowing who to trust. After the astonishing trip, we trudged back down the hill, feeling grateful about the privilege of going on a trip which was free, just to educate and help us.

The day started after we had walked up a very big hill which was really tiring, the hill was very damp and muddy. As we got there we were told to go into the Transmitter hall to wait for the Introduction and the fake news round table to start. The speaker I really liked was Mark Frankel (Social Media Editor, BBC News) because he really touched on the topic of fake news and explained how sometimes even trusted news sources could get things wrong. He also told us the difference between deliberately getting facts wrong for publicity and just a mistake that you didn’t mean to happen.

After the long ‘press conference’ we had a break then we did a workshop on fake news which was personally my favourite part because we got to choose our own news and it was very interactive as we got to put our own ideas in it and who we thought was the most trust worthy and least trust worthy.

In conclusion I would definitely recommend this as it was a good experience and it was very thoughtful for the people to take time out of their day to educate us.

We had finally arrived at Alexandra Palace after a tirelessly walk up the towering hill, to get there. After we had arrived we made are way into the transmitter hall eager to learn about fake news and what it was. We got off to a good start learning about the history and origins of Ally Pally. At 10:45 we listened to a panel of three important people in the media business, Jonathan Freedland is a weekly columnist and writer for the guardian; he went first, second was social media editor for BBC news Mark Frankel and finally was leader and international journalism studier at city university Dr James Rodgers. During the panel, I learned a lot about fake news and it taught me how to spot it and how to tell if something is fake news or not. Finally, we had a great workshop about identifying fake news and testing are knowledge to see if we knew what fake news was and what was not. Overall I had a great time and really enjoyed the experience. 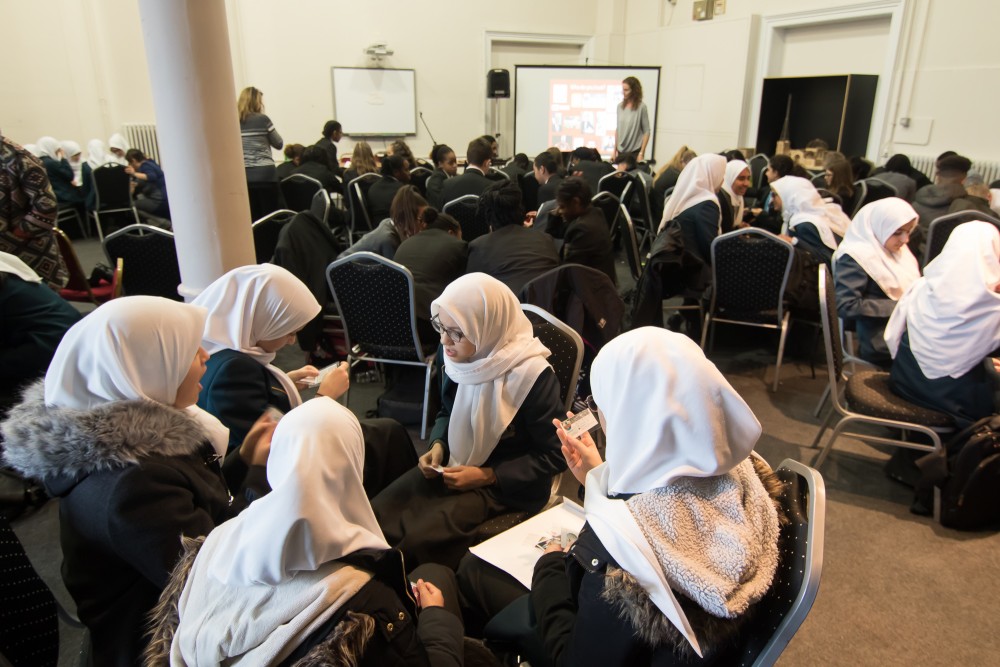 Fake news is not something we automatically know is going to happen. Fake news can be all around us. You may have heard the “news” that pope Francis was supporting Donald Trump. That news went viral but was made by some teenagers in Macedonia just to get money from their website.

You may be wondering what is fake news is? Well, it is news that is not real and hasn’t been verified with a certain company like BBC. When Brexit was happening the fake figure £35 million was placed on the side of the bus despite it being an inaccurate figure, so that is an example of fake news.

How you can look out for fake news? Well what you can do is look for any that doesn’t look right, like a company you don’t recognize.  If you see news on Facebook, Snapchat or Instagram it may be fake news unless it has been put up by a well-known news company like ITV news.

Some people might wonder does it matter if news is fake? Yes, it does matter because we cannot make a decision on something unless we agree on the basic facts on that subject. The chancellor can’t build houses for the homeless unless he knows how many homeless people there are. Before there was any fake news we would have to agree on the facts and then debate what to do about them.

How can you tell whether a social media account is fake? For Twitter you can check if they have a blue tick by their name, but the tick could be fake. Check the spelling of their name, to see if a letter of number in the middle of the name is changed. If it is a politician writing something, look for things that a politician wouldn’t use like abbreviated words like LOL or OMG and they wouldn’t use emoticons in there writing so it could be a fake account.

Here are some more tips for spotting fake news Check the headline for some errors, check the publication, is it the BBC, the Times or something you’ve never heard of, what you do is check the company’s website to see what else they are publishing also when the site was created and where they are based. Check whether other news sources have that news story and if they don’t then it will most likely be fake news.